Q&A: Roach awaits verdicts on next opponents for Pacquiao, Khan 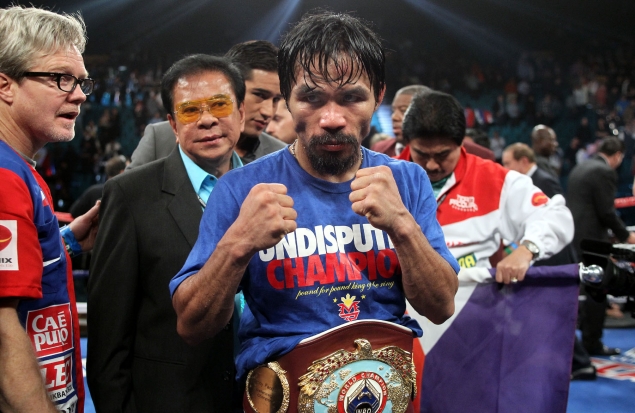 It’s been a dizzying past two months for Freddie Roach, and there aren’t any guarantees that the next couple will be any less of a merry-go-round.

Over the next few days, the five-time trainer of the year award winner could learn whom Pacquiao will choose as his next opponent from a gourp that includes Peterson, Marquez, Floyd Mayweather Jr., Miguel Cotto, or WBO junior welterweight beltholder Tim Bradley.

Pacquiao will be presented the list of prospects by his advisor, Michael Koncz and Top Rank Inc. CEO Bob Arum in his native Philippines.

There is also the possibility that Peterson could face Khan in a return bout, owing to Khan’s having cited poor officiating and scorecard descrepancies among his reasons for having appealed to the IBF and the WBA to overturn Peterson’s victory or else to order an immediate rematch.

More recently, WBA President Gilberto Mendoza already has hinted that a Peterson-Khan rematch is warranted after having studied a video during which Khan asserts that Mustafa Ameen interferes with the judges during the fight.

During an interview with the BBC Sport, Roach claimed familarity with Ameen, who served as the business manager of former Olympic heavyweight hopeful Michael Hunter when Roach worked as an advisor to Team USA in September.

RingTV.com: So who do you believe is next for Pacquiao?

Freddie Roach: To be honest with you, I have no idea what’s going on because Arum told me that he was going to head over to the Philippines to talk to Manny about his next opponent.

With Amir Khan, obviously we’re trying to get the rematch. But I have no clue where they’re at right now with that.

RingTV.com: Having told me that you thought Peterson would be a good opponent for Pacquiao, would you like to speculate on your preferance for either scenario?

FR: Well, I still think that Amir deserves a rematch first, but obviously, Lamont Peterson would be a good fight for Manny also.

But, which way they’ll go, I have no idea. One thing is that I don’t negotiate the fights. I just get them ready for the guys that they give me.

RingTV.com: What are your thoughts on the Ameen situation?

FR: Any time that you have somebody sitting at ringside that’s not an official and doesn’t have an official credential and is not part of the boxing officials, and he’s just a fan, and advisor to Michael Hunter, an amateur fighter, and a friend of Muhammad Ali’s, why was he in that position?

Because officially, he’s not with anybody. So, he’s Michael Hunter’s advisor, and he comes into my gym and so forth, and he’s making comments that I shouldn’t be training the amateur boxing team because I know nothing about amateur boxing. So I told him where to go.

FR: This happened at the Olympic training Center. He said to my assistant, Marie, that I didn’t know anything about amateur boxing, and she repeated it to me, and I said, “Well, why are you talking about my credentials in boxing?”

But I had 150 amateur fights, so I know boxing. So I think that he’s very opinionated. So I know him, and I’ve had dinner with him and a friend of mine one time, and so, since he made that statement, I don’t talk to him.