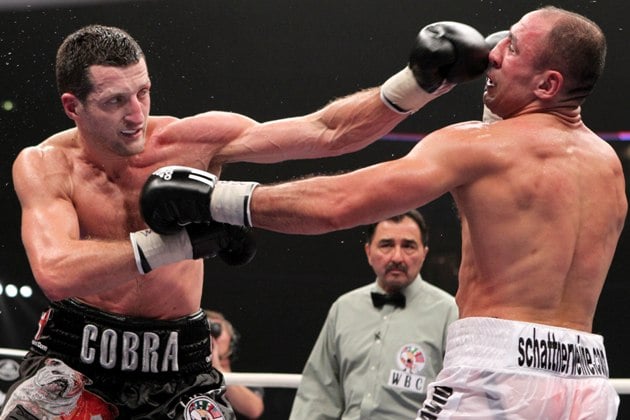 ATLANTIC CITY, N.J.– Carl Froch says he’s “not personally a fan” of Muhammad Ali or Sugar Ray Robinson, and instead draws his inspiration from a different era.

He also believes that Mikkel Kessler made a mistake in taking Andre Ward too lightly in round 1 of the Super Six tournament. Kessler lost by 11th-round technical decision, then in the next round handed Froch the only loss on his record.

Froch’s comments about Ali and Robinson come from an interview conducted by reporter Rodney Hunt of Goossen Tutor Promotions earlier this fall, and are detailed in a recently released video, while his views on Ward and Bute were heard by reporters during Thursday’s roundtable in advance of the Showtime Super Six World Boxing Classic final battle on Saturday.

FROCH ‘NOT A FAN’ OF ALI

Below is an exerpt taken from an interview by Hunt with Froch earlier this fall:

Rodney Hunt: Yesterday, we talked about greatness, who is great, who is not great, giving yourself the title or does somebody have to give it to you. We talked about Ali, and you said that maybe Ali is not one of the greatest or a great fighter. What are your thoughts on that and can you clarify that?

Carl Froch: “We were talking about defining greatness and what a great fighter is. It got very confusing about ‘oh you’re great,’ or ‘you’re a legend,’ or ‘do you consider yourself for greatness.’

It got a little bit boring and a little bit over-hyped. If you’re talking about Muhammad Ali, I’m not personally a Muhammad Al fan. I’m not a lot of boxer’s fans. There are some great fighters.

“Chris Eubank, great boxer, I love his demeanor and I love his attitude. I’m a fan. Nigel Benn, I’m not a massive fan, but I like him. I can go through a list.

“So when I say that I’m not a Muhammad Ali fan, I’m not a big fan of Muhammad Ali. He’s been beat a few times. He’s won some great figthts.

Froch went on to credit Ali for his efforts outside of boxing.

“He’s done some unbelievable things for the sport,” said Froch. “What he did in his time as a boxer, getting across to the public and getting…the way that he handled himself.”

Froch took some exception to the sometimes adversarial relationship between Ali and the late Joe Frazier.

“Sometimes he was harsh. I think that it was bad what he did to Smoking Joe and a couple of fighters that he was disrespectful to,” said Froch.

“But that was all part and parcel to journey, and that’s why he became such a big name by conducting himself in the way that he did. Some people like it, some people dislike it.”

Froch did, however, credit Ali for being a legend.

“There’s legends out there, and obviously, Muhammad Ali is a legend. He really is. And everybody knows that. You’d have to be ignorant and stupid to not realize that. It’s not that I don’t like him. I’m not a fan of his boxing. Of his actual boxing. I like different styles of boxing. But there’s a certain style that I like. And Muhammad Ali’s style, you know, sitting on the ropes, taking shots, talking about wearing his opponent down, which he does in a lot of his fights,” said Froch.

“I don’t like that style of fighting. I like to see somebody like a Roy Jones. Speed. Skill. Or, on the flip side of that, I like to see somebody who goes into the trenches, and has a real tough fight, slugging it out. Obviously, for moments, he’s involved in that. But he’s not at the top of my list He’s totally in my top five, he’s just not No. 1. That’s all.”