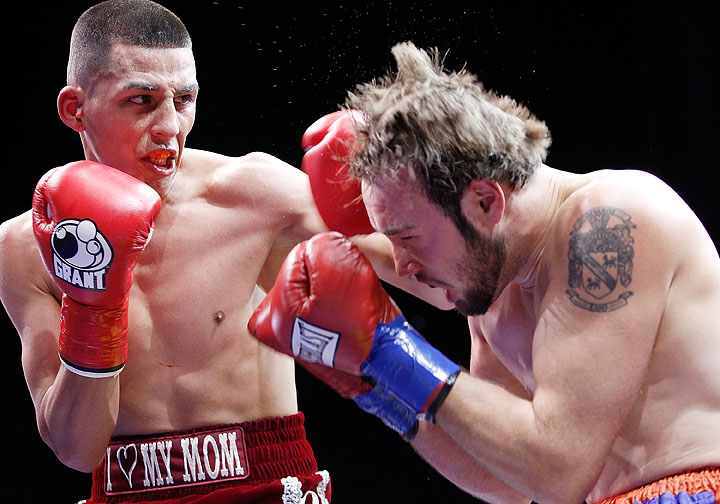 LOS ANGELES — Hugo Centeno made his Fight Night Club debut a successful one with a unanimous decision over David Lopez in the main event of the final 2011 show of the Club Nokia series on Thursday.

Centeno (11-0, 6 knockouts) out-boxed and out-worked his game opponent over six rounds to win by unanimous shutout scores of 60-54. The 20-year-old welterweight prospect from Oxnard, Calif., controlled the tempo and distance of the fight with a constant jab, delivered from both the right-handed and southpaw stance.

Lopez (3-7-3), a crafty southpaw from Parma, Idaho, had his moments during the bout, scoring with flush counter lefts in spots during the second half of the bout. But the 24-year-old journeyman did not let his hands go enough to win a round, although he made a strong effort to do so in the final round.

However, even when Lopez finally took the fight to Centeno and forced the undefeated boxer back on his heels, the young switch-hitter repeatedly landed head-snapping uppercuts during the inside fighting and grappling.

In the co-featured bout of the card, which was televised on Fox Sports Net and streamed live on RingTV.com, Santiago Guevara won his second pro bout with a second-round stoppage of undersized and overmatched Salvador Cifuentes.

Guevara (2-0, 1 KO), a 24-year-old lightweight from Montebello, Calif., dropped Cifuentes with a right-to-the-body right-uppercut combination in the first round and continued to pummel the 28-year-old journeyman with both hands until referee Wayne Hedgepeth had seen enough midway through the second round.

Cifuentes (1-3), of Chula Vista, Calif., was game but, the natural bantamweight simply lacked the size, power and technique to compete with Guevara, who looks like he could develop into a decent prospect.

In the opening bout, and by far the best fight, of the Golden Boy Promotions card, Luis Mora and Cameron Krael fought tooth and nail to a four-round majority draw.

The bout was originally announced as a majority decision — 38-38 and two scores of 39-37 — victory for Mora (1-0-1, 1 KO), who pressed forward the entire fight while scoring well with his overhand right.

However, one of the 39-37 scorecards was incorrectly tallied and when set right to 38-38, Krael (0-0-2) was spared his first pro loss, which is just as well because the rangy Las Vegas-based Hawaiian boxed well and fought effectively in spots.

Krael, who is two weeks away from his 18th birthday, showed a lot of promise with his crisp jab, smooth footwork and combination punching in close. So did Mora. The 22-year-old crowd favorite from L.A. is a relentless pressure fighter, the kind that can become a strong attraction in Southern California. 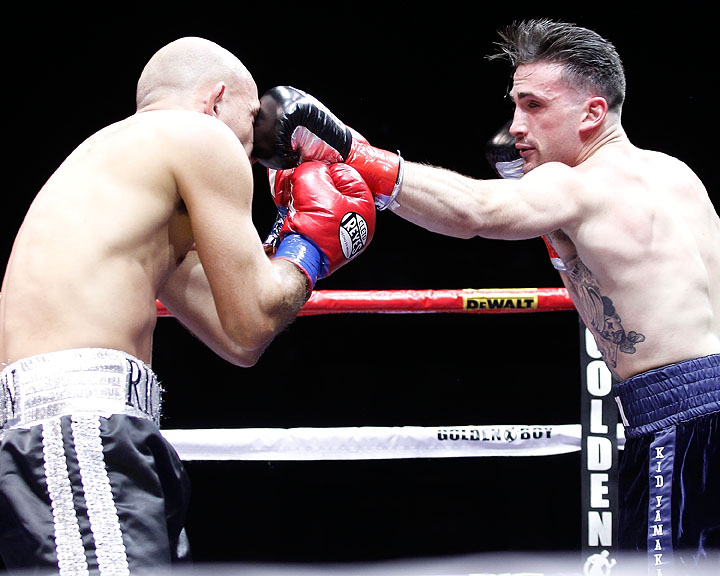 Wohlman, who is trained by Eric Brown and Freddie Roach, outboxed the raw 29-year-old journeyman with a busy jab, accurate counter left hooks and constant lateral movement. The 23-year-old boxer dropped Malfavon (1-7-1, 1 KO) with a perfect left hook at the start of the fourth round, which resulted in unanimous shutout scores of 40-35.

The first fight of the card featured Florida-based amateur standout Daquan Arnett, who survived a scare in the second round to win his pro debut with a majority four-round decision over Cleven Ishe.

Arnett was the faster, busier and more accurate puncher of the two, but Ishe (3-4), 23-year-old spoiler from Watts, Calif., stalked the game and skilled 19 year old and landed in spots. The best shot Ishe landed was an overhand right that buckled the Arnett’s legs in the second round.

However, the teenager closed the round strong and fought hard in rounds three and four to ensure his victory.