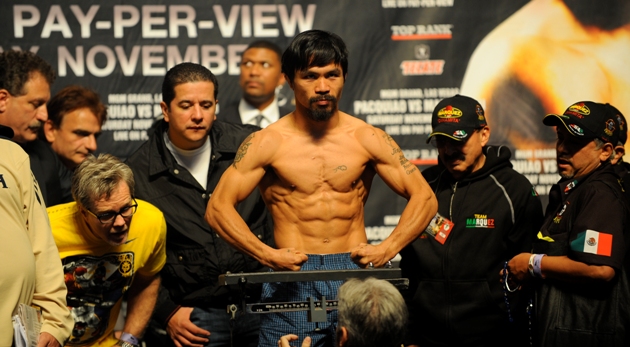 LAS VEGAS — For about 10 seconds, they stared at each other intensely in front of 5,000 screaming fans who had packed into the MGM Grand’s Garden Arena for Friday’s pre-fight weigh-in.

Moments earlier, Manny Pacquiao had tipped the scales at 143 pounds, one pound under the catchweight limit of 144 pounds, while his rival for Saturday night’s HBO Pay Per View-televised clash, Juan Manuel Marquez, tipped the scale at 142.

Pacquiauo allowed for a smile during the staredowns with his past three rivals before scoring relatively easy unanimous decision victories over Joshua Clottey, Shane Mosley and Antonio Margarito.

But none of them has been as difficult an opponent as Marquez, whom Pacquiao has battled twice already to a draw and a split-decision victory in 2004 and 2008.

“I really need to have my best performance in this fight,” said Pacquiao, who was lustily booed by Marquez fans, even as they may have been out-numbered by Pacquiao’s followers perhaps by 60 percent to 40 percent.

“I do not want to disappoint the fans. We’ve trained hard and we’re ready for this fight. I’m just going to rest and get ready for the fight.”

Pacquiao dropped Marquez three times in the first round of their initial meeting, but Marquez survived and pushed the fight to the draw. In their second fight, Pacquiao won a split decision by virtue of a knockdown scored in the third round.

Marquez is fighting at the highest weight ever in his career for only the second time as a professional.

In his welterweight debut in September of 2009, Marquez lost a one-sided unanimous decision to current WBC welterweight beltholder Floyd Mayweather Jr. (42-0, 26 KOs), even though he weighed in at the same weight that he did on Friday.

This time, however, Marquez’s ripped and chiseled upper body was apparent.

Marquez’s muscularity was well-distrubuted over his body as the result of his work with newly-hired, controversial strength and conditioning coach, Angel Hernandez.

Hernandez’s past includes having given the blood-booster EPO, growth hormone and insulin to track star Marion Jones in 2000 at the request of her then-coach Trevor Graham, as well as selling banned substances to sprinter Tim Montgomery.

“But the only way to use strength is to throw punches. So the thing is that I think Marquez is going to come out fast and I don’t think that he’ll be the counterpuncher in this fight. I think that he will fall into our hands and I think that Manny will do very well against him.”

Asked about the fact that Marquez has seemed extremely confident going into Saturday night’s bout, Roach has a short reply.

“The first time Pacquiao knocks him on his a–,” said Roach, “That will take his confidence away. I don’t think that he’s going to be able to get up from this Manny Pacquiao punch.” 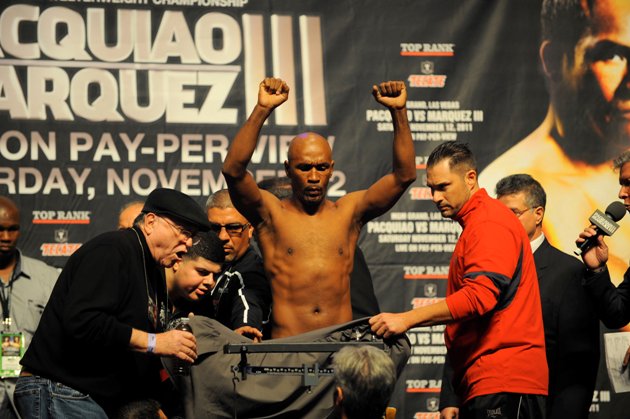 Tim Bradley (27-0, 11 KOs) weighed in at the junior welterweight limit of 140, as did his counterpart, Joel Casamayor, but Casamayor did so only after a bit of drama.

Earlier on, Casamayor stripped nude before standing on the scales, at which point weigh-in moderator and ring announcer, Michael Buffer, made the crowd aware that “one trip to the bathroom” should take care of Camayor’s extra pound.

Bradley is THE RING’s No. 8-rated pound-for-pound fighter, and will be defending his WBO junior welterweight belt against Casamayor.

Alvarado will pursue his 10th stoppage over his past 12 bouts against the 28-year-old Prescott, who is best known for a 54-second knockout over RING No. 1-rated junior welterweight and current WBA/IBF beltholder Amir Khan (26-1, 18 KOs) in September of 2008.

Cruz will be after his seventh knockout in his past right fights and his second consecutive stoppage victory when he meets Burgos.

Burgos is pursing his third straight win since losing by unanimous decision to Japan’s Hozumi Hasegawa in a failed bid to earn the WBC’s vacant featherweight belt in November.

Referee Tony Weeks will be the third man in the ring for Pacquiao-Marquez III, whose judges will be Robert Hoyle, Dave Moretti and Glenn Trowbridge.

Moretti has worked four of Pacquiao’s past five fights, and was also among those judging at ringside for Marquez’s loss to Mayweather.

Trowbridge also had Pacquiao over Mosley, 119-108.

Referee Vic Drakulich has been chosen to referee Bradley-Casamayor, with Nevada-based Adalaide Byrd and Burt Clemens, as well as Mexico’s Levi Martinez being the judges.