Pacquiao Q&A: Ready for all scenarios 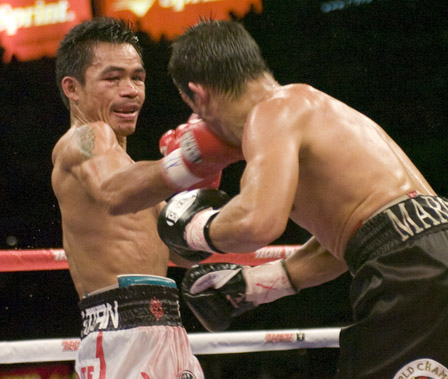 LAS VEGAS — On Wednesday, Manny Pacquiao held a half-hour press conference at the MGM Grand during which he answered questions from reporters concerning his imminent fight against Juan Manuel Marquez.

The 32-year-old Pacquiao (53-3-2, 38 knockouts) described how important it is to him not only vanquish Marquez (53-5-1, 39 KOs) in a crowd-pleasing manner, but to also erase all doubts that he is truly better than the man whom he has battled twice already, but with what many have called inconclusive results.

In 2004, Pacquiao dropped Marquez three times in the first round of their initial meeting but Marquez survived and pushed the fight to a draw, and in 2008 Pacquiao won a split decision by virtue of a knockdown scored in the third round.

Pacquiao also addressed balancing his role as a boxer with his responsibilities as a congressman in his native Philippines, as well as the notion of a potential bout with WBC welterweight beltholder Floyd Mayweather Jr. (42-0, 26 KOs), with whom negotiations to make a bout have twice failed over the issue of drug testing.

Pacquiao was also asked about Marquez’s hiring of controversial strength and conditioning coach, Angel Hernandez, whose past includes having given the blood-booster EPO, growth hormone and insulin to track star Marion Jones in 2000 at the request of her then-coach Trevor Graham, as well as selling banned substances to sprinter Tim Montgomery.

Below are some of Pacquiao’s comments:

Manny Pacquiao on the difference in his abilities since the past two fights with Marquez:

“The last two fights that we had, that was three or four years ago and the first one was six or seven years ago. So it’s been a long time. Right now, I’m a bit different compared to the last two fights. I have improved my style and my techniques.

“The question that I have for myself is what do I need to do to prove to him and to some people that I won both of the other fights.”