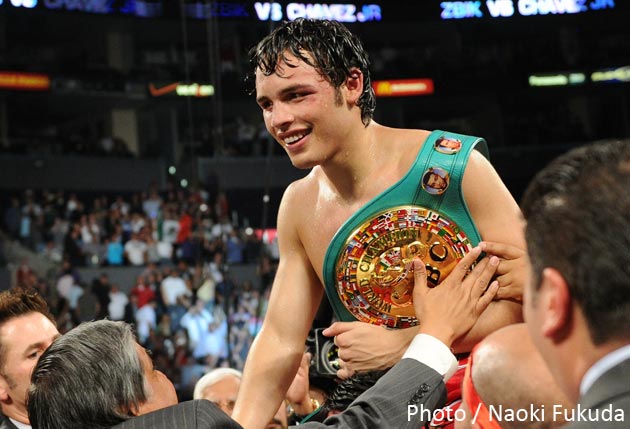 The 25-year-old son of the former champion with the same name told RING TV.com on Thursday night that he would first like to thrill his followers, with what would surely be an insanely popular event, in a fight opposite RING No. 2-rated junior middleweight Saul “Canelo” Alvarez.

But Top Rank Promotions CEO Bob Arum, who handles Chavez Jr., Cotto and Margarito, and Golden Boy Promotions CEO Richard Schaefer, who has Alvarez, have already indicated to RingTV.com that when the smoke clears they will move ahead in an attempt to match Chavez Jr. and Alvarez.

“I think that I would like to fight Alvarez first, for the Mexican people,” said Chavez Jr. “If not, then Cotto or Margarito. That would be big.”

Chavez Jr. said that he would prefer to do the fights at his weight class with his belt on the line, but that he would be willing to take them at a catchweight if necessary.