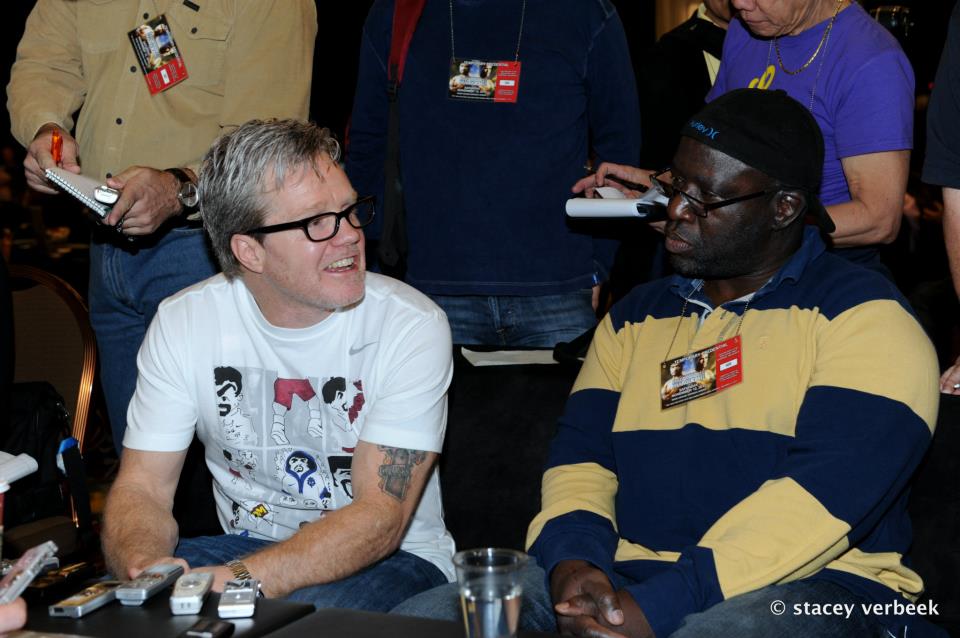 LAS VEGAS — Five-time Trainer of the Year Freddie Roach’ was alternately comical, intense and philisophical during an interview with reporters in a press room on Thursday at the MGM Grand, where his RING No. 1-pound-for-pound king Manny Pacquiao will defend his WBO welterweight belt against RING No. 5-rated pound-for-pound Juan Manuel Marquez on Saturday night at the venue’s Grand Garden Arena.

Roach said that the 32-year-old, eight-division titleholder Pacquiao (53-3-2, 38 knockouts) is not only primed for his HBO Pay Per View-televised clash with WBO/WBA lightweight beltholder Marquez (53-5-1, 39 KOs), but that he will erase all doubts by knockout out the man with whom he has battled to a draw and a split-decision victory in 2004 and 2008 respectively.

Roach also addressed the notion of a potential bout between Pacquiao and RING No. 2-rated pound-for-pound and WBC welterweight beltholder Foyd Mayweather Jr. (42-0, 26 KOs) in the wake of the fact that negotiations to make a bout between Pacquiao — handled by Top Rank Inc. — and Mayweather — aligned with Golden Boy Promotions — have twice-failed over the issue of drug testing.

Roach poked fun at the fact that Mayweather’s adviser, Leonard Ellerbe, has announced that the fighter, who turns 35 in February, will return to the MGM Grand on May 5 against an opponent to be determined, hinting that Mayweather wants that rival to be Pacquiao.

Meanwhile, Roach would not cast aspersions on Marquez in the wake of his hiring of controversial strength and conditioning coach, Angel Hernandez, who was known as Angel Heredia when he acknowledged having given the blood-booster EPO, growth hormone and insulin to track star Marion Jones in 2000 at the request of her then-coach Trevor Graham, as well as selling banned substances to sprinter Tim Montgomery.

Marquez said that he was unaware of Hernandez’s past when he hired the 36-year-old to assist longtime trainer Nacho Beristain for the Pacquiao fight.

Below are more of Roach’s comments from the roundtable interview.

Freddie Roach on Mayweather’s announced return to the ring:

“Come on, Leonard Ellerbe makes a statement and we’re going to believe him? Why don’t Floyd say it? He’s supposed to be his own boss. Come on, Floyd, speak up. Coming from Ellerbe, who gives a s–t. He’s just jacking us all off. I would love for Manny to fight as soon as possible.”

On why the emphasis on a knockout of Marquez:

“I believe that all fights should end in knockouts. The thing is, Manny’s a compassionate guy, and I believe that he let the last two guys off the hook.

“I wish that he wasn’t so compassionate in these fights, because one punch can change things if you get lucky, and anything can happen. So, you know, Manny Pacquiao will never predict a knockout.

“He’s just not that type of a person. But I know that the way that he’s trained and the motivation that he’s had in his workouts that he’s got a little extra. He’s been a little bit meaner to the sparring partners in sparring.

“His attitude has just been a lot more aggressive. He wants this fight very badly. I think that Marquez did give him a slap in the face when he wore those shirts twice to the Philippines and tried to campaign. He got a little bit of a following in the Philippines, and that didn’t sit well with Manny. I think that Manny’s going to pay him back.

“Now, he’s got a new strength coach and he’s put some muscle on and he’s bigger and stronger, but I don’t think that will really help his punching power.”

On the difference between Pacquiao’s aggression for Marquez and his feelings for Mayweather:

“Manny doesn’t dislike too many people, but those are two people that he feels have disrected him. I don’t think that he likes either one of them, but you will never get him to say that. I can tell by his work ethic and the way that he’s been trainign for this fight that he has a little extra fire in him.

“I don’t see any danger in the way he’s aggressive. He like to exchange when the time is right. He’s not going to fight a dumb fight, that’s for sure. The thing is, I think that this fight’s going to start quickly, and I told Manny that Marquez put a lot of muscle on.

“Why else do you put muscle on except for strength. It doesn’t help counter-punching or your speed. So I think that he’s going to come out aggressively and try to get Manny out of there. I think that the fight is going to start with early action.” 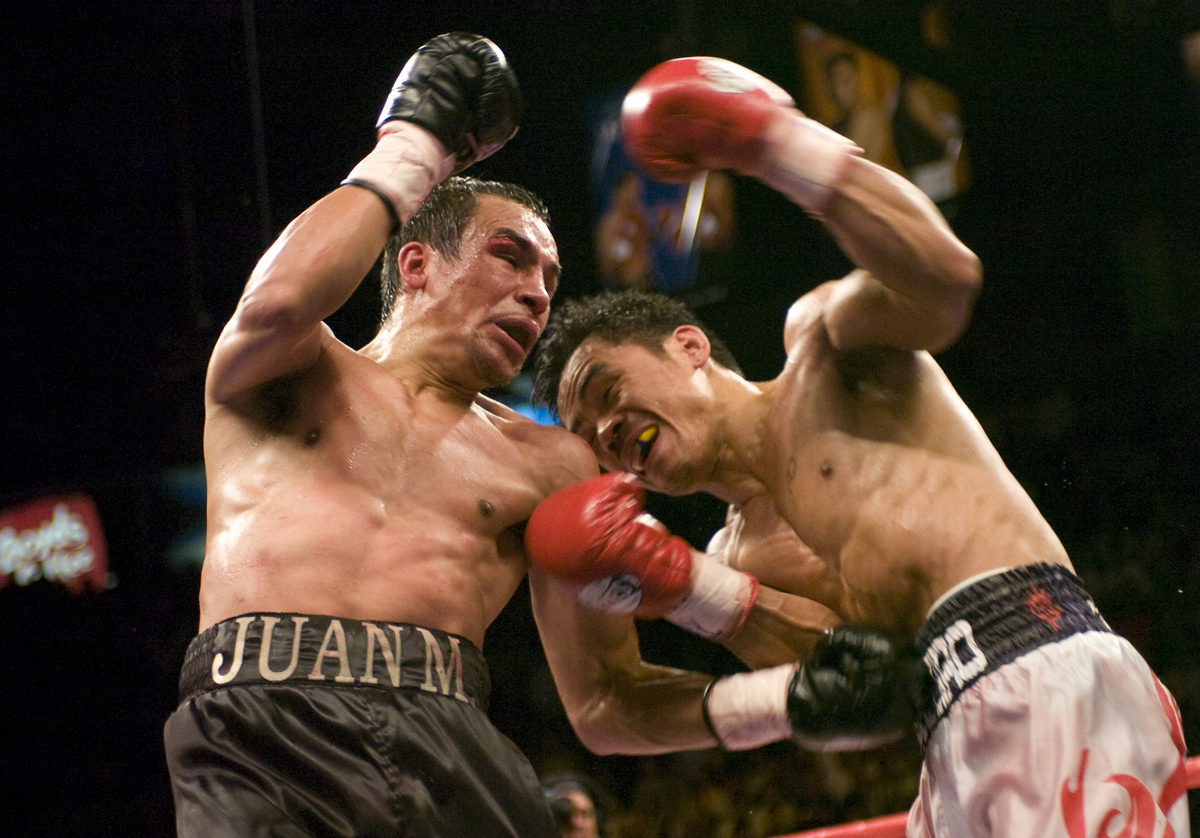 On why Marquez’s style troubles Pacquiao:

“Marquez knows how to fight southaws well and he knows not to lead with the jab and to lead with the right hand, and Manny was stuck moving into that at one time when he moved in one direction. But now, he moves laterally well in both directions and I think that will be a big difference in this.

“Manny’s punching power has grown with the weight-gain and I think that if Manny puts him down this time, I don’t think that he will get up. We’ve worked on drawing Marquez’s lead out a little bit. He’s not strictly a counter-puncher any more. They’ve both changed styles.

“Manny’s become a btter boxer and Marquez has become a more aggressive and more exciting puncher to become more television friendly. That aggressiveness will favor Manny more, because Manny likes when people come to him.”

“The right hand of Manny’s has improved since their first two fights. That’s my baby. I told Manny that I’m not going to be satisfied until his right hand is as good as his left hand. Now, it is at this point. So he can knock Marquez out with either hand.

“When they fought the first two times, Manny only had the left hand. They both get ready, they both get in shape and they both come to fight. They both have a lot of heart and they’re both very determined people. That’s why we’re having a trilogy here.

“That’s the most important part. People don’t realize how much of a key the footwork is. Manny’s footwork is the key to the fight. Manny has movement where you think that he’s coming, but he’s not. He feints his way in and draws the lead out. He’s very effiecient at that.

“His balance has gotten a lot better. He does throw a wild shot here and there, but he has improved immensely with the footwork. He’s so hard to judge that you don’t know whether he’s coming or going. He can come when you’re not ready. I think that will give Marquez a lot of problems.”

On the scoring on the first fight, wherre Pacquiao scored three knockdowns in the firt round:

“In the first fight, one judge [Burt A. Clements scored the fight even] made a mistake, and he admitted to it. I protested it, but they said that it’s like a referee missing a call. I said, “Nah, that’s not really true. The judge admitted that he didn’t know the rules.”

“I would have gone the other way and went back to my counter-punching style that gave Manny trouble. But I’m not Nacho. Muscle is strength and so forth, but it doesn’t necessarily make you a better puncher. The thing is that I think that too much muscle too quickly can hurt him.

“I would have tried this out in a couple of tuneup fights at first, but I don’t think that he had that liberty to do that. So they seem to have a plan to exchange with us, and I love that idea when people exchange with Manny Pacquiao.

On the presence of Hernandez in Marquez’s camp:

“You now, I’m so tired of that bulls–t. You get a fighter who you get into shape and you make him work hard, and all of a sudden he does well and all of a sudden there’s something fishy about him? You know? With Manny Pacquiao and with Amir Khan and Jorge Linares when he fought, even though he lost, he was in great shape.

“That means he’s on steroids? I’m so tired of it that I don’t want to do that to Marquez. I feel that he’s just getting ready for the fight and you know that the guy [Hernandez] was involved in steroids before and he was a rat. But I don’t care about that. It has nothing to do with me.” 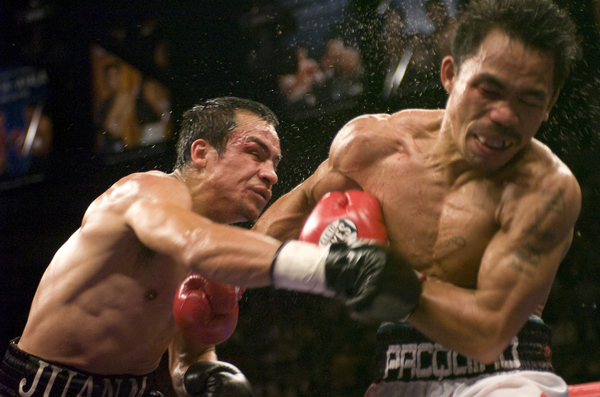 “He will go down as one of the best of his generation, but one thing that’s going to hurt him is the fact that he’s a counter-puncher. Counter-punchers are a little boring at times.

“Erik Morales and Marco Antonio Barrera were more offensive-minded and so forth, so I think that he’s less liked by the Mexican fans because of his counter-punching abiltities.

“He doesn’t really fight like a true Mexican, so I think that will hurt him a little bit in his legacy. But technique-wise, h’s probably better than all of those guys.”