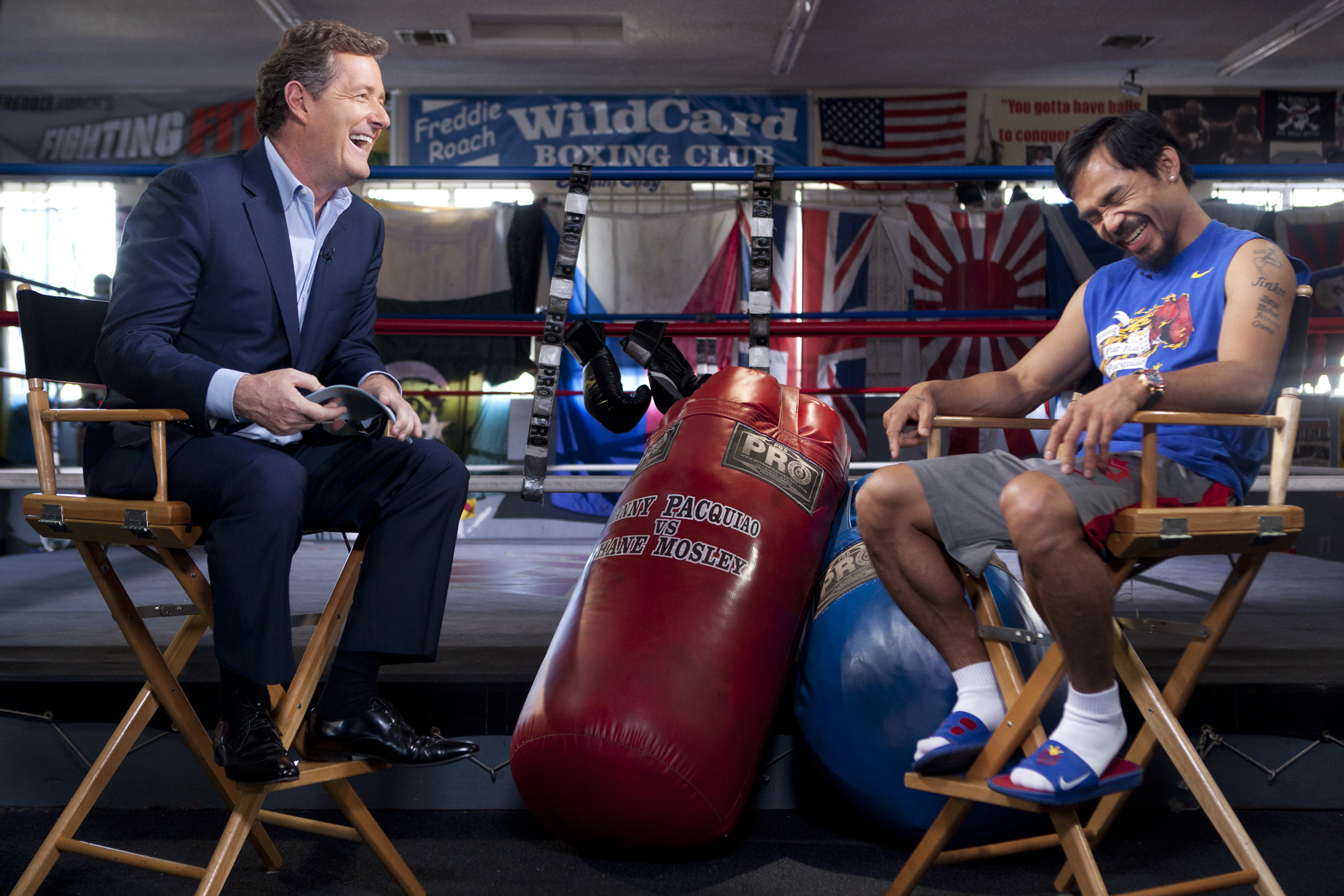 LAS VEGAS — Manny Pacquiao, his trainer Freddie Roach, and Top Rank Inc. CEO Bob Arum will be featured in a one-hour interview on CNN’s “Piers Morgan Tonight” at 9 p.m. and again at midnight on both the East and West coasts from the Wild Card Boxing Club owned by Roach in Hollywood, Calif.

The interview is being aired before Pacquiao (53-3-2, 38 KOs) defends his WBO welterweight belt against RING lightweight champ Juan Manuel Marquez  (53-5-1, 39 KOs) at the MGM Grand Hotel on Saturday night on HBO Pay Per View.

The 32-year-old Pacquiao takes a 14-bout winning streak that includes eight knockouts against the 38-year-old Marquez, whom he battled to a draw and a split-decision victory in May of 2004 and March of 2008.

HBO ZONES IN ON PACQUIAO-MARQUEZ III

In honor of former heavyweight champ Joe Frazier, who passed away on Nov. 7, HBO will show Thrilla in Manila, a 2009 documentary chronicling Frazier’s rivalry with Muhammad Ali and Joe Frazier and their classic thrid fight, as seen through the eyes of Frazier.

From noon until 6 p.m., HBO’s “Road block” will close out the evening leading directly up to Pacquiao-Marquez III.

FRAZIER TO BE PRAISED PRIOR TO PACQUIAO-MARQUEZ III

Frazier, who died at the age of 67 from liver cancer, will be honored by a 10-count prior to the commencement of Pacquiao-Marquez III

“We have organized a montage of Joe’s life, which will be shown in the arena before the fight, and then we will sound the bell in remembrance of Joe,” Arum told The Telegraph.

Pacquiao told The Telegraph that he was inspired by Frazer.

“When I was growing up, I heard about this big fight in the Philippines. I asked my uncle for a DVD because I wanted to watch that fight,” Pacquiao.

Frazier’s funeral is scheduled for Monday from 9-to-11 at ÔÇ¿Enon Tabernacle Baptist ChurchÔÇ¿ at 2800 West Cheltenham Ave, Philadelphia, PA 19150.

In lieu of flowers, the Frazier family asks for donations to ÔÇ¿The American Cancer Society. Checks should be made payable to ACS, Inc, at ÔÇ¿8400 Silver Crossing,  Oklahoma City, OK 73132.ÔÇ¿

“It is something that I found to be disgusting. It is designed to demean one of my great heroes, Muhammad Ali, and it’s chock full of inaccuracies and it is testimony from people who weren’t even there,” said Arum, who co-promoted the clash with Don King.

“I was there. I was there the whole time. It is an unfair attack on Muhammad Ali, and I condemn it. I just wanted to say that. Watch it, but don’t believe a word that’s being said.”

ARUM ON THE REMATCH CLAUSE FOR PACQUIAO

“I don’t make any secret of that fact. There’s a rematch clause in there at Top Rank’s option, should Marquez win. Without question,” said Arum. “No question. Is there a rematch clause? The answer is ‘yes.'”

Ariza told RingTV.com that the primary difference between the results of the first two meetings between Pacquiao and Marquez and their match up on Saturday night will be the power in Pacquiao’s right hand.

Since teaming up with Ariza, Pacquiao has scored knockouts over David Diaz, Oscar De La Hoya, Ricky Hatton and Miguel Cotto, in the ninth, eighth, second and 12th rounds.

“I want to sit there and say that what I have been working on with Manny has everything to do with it. If you look at his fight with Marco Antonio Barrera, Manny went 12 rounds with him. When he fought with Marquez, they both went 12 rounds,” said Ariza.

“But when he got with him, he stopped David Diaz, he knocked out Oscar De La Hoya and he comatosed Ricky Hatton, and he knocked out Miguel Cotto. So you tell me what the difference is in the years and the fights that he had before that.”

Ariza said that he has watched both of the Pacquiao-Marquez fights, during which Marquez was floored three times in the first round of the initial bout and once in the third round of the second.

“If I was with him, that first punch when he first dropped Marquez would have been lights out. I can guarantee you that if Manny hits Marquez on Saturday night like he hit him in those other fights, Marquez is not going to get up,” said Ariza.

“At the time that I came to Manny, he had explained to me that he could no longer fight explosively and with power and movement beyond the sixth round, but we’ve shown that he is able to do that now. So now,  Manny will have that power in both hands, and on Saturday night, that’s going to be the difference.”

Noteworthy: Arum noted that he promoted Marquez for the first fight with Pacquiao, Pacquiao for their rematch, and that he promotes both fighters entering Saturday night’s clash. Arum also introduced Pacquiao’s adviser, Michael Koncz, as the fighter’s “chief whipping boy.”