Donaire shuts out Narvaez but is frustrated by defensive veteran 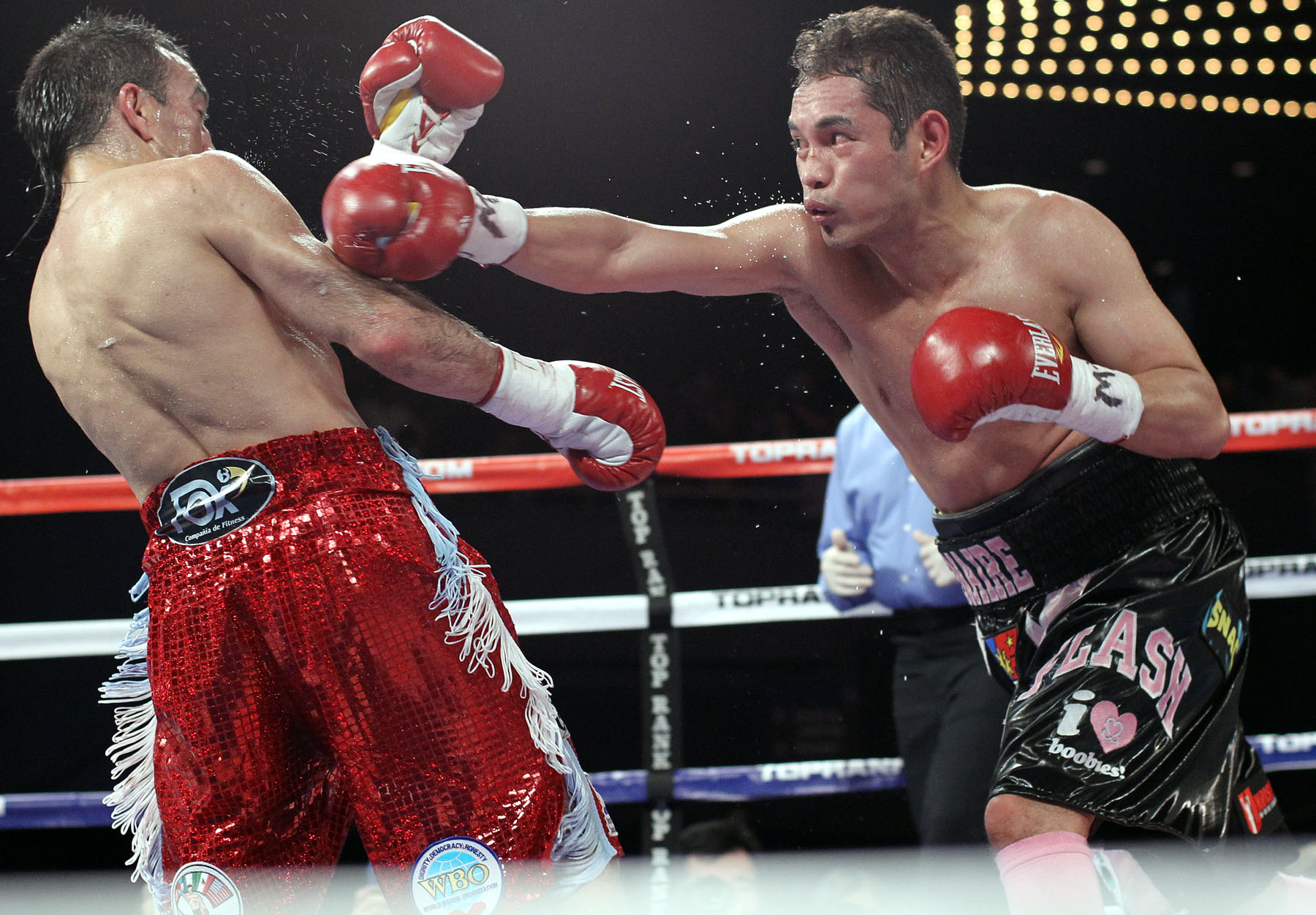 NEW YORK — When the bell ended signaling the end of the 12th and final round of Nonito Donaire’s one-sided but uneventful decision over Omar Narvaez, Narvaez ran over to a neutral corner, stood on the middle strand of the ropes and thrust his hands skyward.

Then, one of Narvaez’s camp members hoisted the 36-year-old veteran onto his shoulders and carried him aloft around the ring as if he had just succeeded in dethroning heavily favored WBO/WBC bantamweight beltholder before 4,425 WaMu Theater inside Madison Square Garden.

Meanwhile, the crowed booed lustily, expressing obscenities and generally shouting its displeasure. As for Donaire’s reaction to Narvaez’s celebration, if you blinked you missed it. THE RING’s No. 1-rated bantamweight started toward Narvaez as though he wanted to give the WBO 115-pound beltholder a piece of his mind, but he thought better of it, spun quickly on his heels, turned away and then shouted his displeasure at observes from a neutral corner.

Eventually, Donaire touched gloves and embraced Narvaez. But the look of disgust on Donaire’s face told the story of the fight. The usually upbeat bantamweight titleholder even spoke as if he had lost.

“I didn’t even want to look at him. I was so frustrated,” Donaire said. “I wanted to apologize to the fans, because the fans didn’t deserve this. This was my first time on the East Coast and in Madison Square Garden, and I wanted to give them a better fight.”

Donaire won every round to take a unanimous decision by shutout tallies of 120-108 on the cards of judges Steve Weisfeld, Tom Schreck and Julie Lederman. RingTV.com had him winning by the same score.

But as aggressive as Donaire tried to be in the fight — at times, dropping his hands and sticking out his chin to bate Narvaez and daring him to hit him — “The Filipino Flash” was unable to pull the Argentine out of his defensive shell.

“I was opening myself up to be hit. You saw me. I was daring him to hit me and dropping my hands and everything,” said Donaire, who out-landed Narvaez, 99-to-74, overall in his third fight at 118 pounds.

“I wanted to hit him so badly. I wanted to really take him out. The fans just did not deserve this, and I apologize deeply for that. I wanted a knockout in the worst way, but you know, sometimes, this happens.”

Donaire came nowhere near equaling his two prior efforts in the division — a fourth-round knockout of Wladimir Sidorenko in December of last year, and a follow-up second-round stoppage of three-division titleholder Fernando Montiel in February.

Donaire managed to rock Narvaez in the fourth round with a left uppercut followed by a right hand and then two more rights, but Narvaez was sure not to leave himself open for further punishment down the stretch.

“This guy came to survive, but we were expecting a lot more from a fighter from Argentina,” Donaire’s trainer Robert Garcia said of Narvaez, who made 16 defenses of the WBO flyweight title he held for more than seven years.

“I guess that he was just here to survive. As much as we told Nonito to go to the body, tap tap and follow up with those hooks, as soon as Nonito would step, he would turn and cover up.”

Donaire was also bothered by cramping in his legs in the eighth round, a testament to the fact that this was the most difficult time he has had making the 118-pound weight limit. Donaire, who walks around weighing as much as 145 pounds, is moving up to the 122-pound division for his next fight either in January or February.

Future plans for Donaire in the eyes of Top Rank CEO Bob Arum include a potential matchup with WBO junior featherweight beltholder Jorge Arce (58-6-1, 44 KOs) in January or February, followed by one against WBC super bantamweight titleholder Toshiaki Nishioka (39-4-3, 24 KOs) in May or June.

“The plans are to go up to 122, not only because he does have a hard time making the weight,” said Garcia. “But eventually we want to end up at featherweight maybe sometime next year. So we’ll see at our next fight. But that’s the plan, to move up in weight.”

Arce defended his belt with a fourth-round stoppage of Simphiwe Nongqayi (16-2-1, 6 KOs) on Sept. 15. The 32-year-old Arce is 6-0-1 with five knockouts since last suffering defeat, that loss being against Nongqayi by unanimous decision in Sept. of 2009.

The 35-year-old Nishioka scored his 16th-straight victory with a unanimous decision over former two-division titleholder Rafael Marquez (40-7, 36 KOs) on Oct. 1.

Nishioka is also the last man to defeat WBC featherweight titleholder Jhonny Gonzalez (50-7, 44 KOs) in May of 2009, a fight in which Nishioka rose from a first-round knockdown and then floored Gonzalez in the third to score a knockout.