From the pages of THE RING magazine: Fight Doctor on body shots

Note: This story appears in the October 2011 issue of THE RING magazine, which is available now on newsstands or in our new digital format.

Following Bernard Hopkins dramatic 2004 stoppage of Oscar De La Hoya with a left hook to the body, De La Hoya told the media, “It’s hard for someone to knock me out – never in my wildest dreams did I think I’d get stopped by a bodyshot.”

In fact, some of the most memorable victories in boxing have been from bodyshots. Who can forget Micky Ward’s seventh-round left hook-to-the liver knockout of Alfonso Sanchez in 1997, Virgil Hill’s inability to stand after Roy Jones looped a right hand to Hill’s body in 1998, or Arturo Gatti’s knockout of Leo Dorin with a left hook to the body in 2004? What made these punches as treacherous as a headshot? 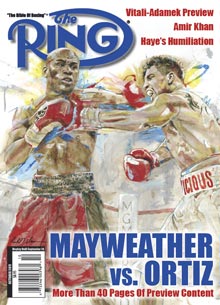 There are several areas for a boxer to legally strike the torso: the solar plexus, the sternum, the diaphragm, the ribs, and the upper abdomen – including the liver and spleen.

The solar plexus, medically known as the celiac plexus, is a network of nerves that lies just below the tip of the sternum – the flat breastbone situated in the central portion of the chest. A blow to this area will feel as if you had the wind knocked out of you. It can also cause the diaphragm to spasm. The diaphragm is a dome-like structure and the major muscle of respiration (breathing). It separates the thoracic (upper torso) and abdomen. Diaphragm injury results in difficulty expanding the chest and limits breathing.

Direct punches to the sternum or the ribs can feel like a heart attack. Sternum or rib injury increases significantly when taking a deep breath, while heart attack pain is there regardless. If a boxer were to break a rib during a bout, the fighter might be focused on the pain while the ring physician would be concerned about a punctured lung if the rib pieces were separated from one another.

The liver, located in the right upper quadrant of the torso, is the largest abdominal organ with a huge blood supply. The spleen is the most commonly injured abdominal organ and is on the opposite side of the liver. It produces white blood cells and filters, stores and destroys aging red blood cells. Injury to the liver or spleen will produce severe pain, nausea/vomiting or even shoulder pain. These shots can be life threatening as the symptoms may be missed or it may take hours to days for internal bleeding, swelling or fever to develop. So the boxer might absorb cumulative punches in the process and not recognize he is seriously hurt until it is too late.

To continue reading this article from the September 2011 issue of THE RING magazine and receive more than 100 pages of additional boxing content, please click here to purchase a single copy of the new Ring Digital Edition for only $3.99 (55 percent off the cover price). Or you can subscribe to the Digital Edition by going to same link.