The month of August comes to a disappointing close with the cancelation of the anticipated Marcos Maidana-Robert Guerrero fight.

Maidana, THE RING’s No. 3-rated junior welterweight, was expected to receive a stern challenge from the magazine’s No. 3-rated lightweight, who had to pull out of the Aug. 27 fight with a severe shoulder injury suffered in training.

However, fight fans won’t have to wait very long for other significant high-profile matchups between bona-fide contenders. Four bouts between RING-ranked contenders are coming up next month. 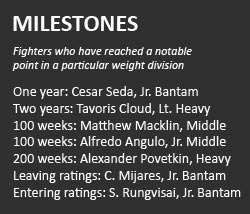 The HBO-televised bout is Berto’s first since his thrilling decision loss Victor Ortiz in April.

The anticipated heavyweight bout, which is expected to fill a 45,000-seat soccer stadium in Wroclaw, will be televised live on HBO. Later that same day the premium cable network will air a scheduled 12-round featherweight bout between Yuriorkis Gamboa and Daniel Ponce de Leon from Atlantic City.

Gamboa, an ultra-talented former Cuban amateur star, is THE RING’s No. 1-rated featherweight. De Leon, a hard-punching former 122-pound beltholder from Mexico, is the magazine’s No. 5-rated 126 pounder.

And on Sept. 17, Lucas Matthysse, THE RING’s No. 6-rated junior welterweight, takes on Mexican legend Erik Morales, the magazine’s No. 8-rated 140 pounder.

Morales and the powerful Argentine will vie for the vacant WBC title on the pay-per-view undercard of the Floyd Mayweather-Ortiz fight in Las Vegas.

Baring any unfortunate training injuries it should be a September to remember.

Suriyan Sor Rungvisia’s 12-round decision over Tomas Rojas and Chistian Mijares’ announcement that he is leaving the 115-pound class caused a shakeup among the junior bantamweights. Rungvisia enters at No. 3, while Rojas slips from No. 2 to No. 4. Rojas’ demotion also advances Omar Narvaez (No. 3 last week) to No. 2. Nobuo Nashiro (No. 4 last week), Yota Sato (No. 5 last week), and Cesar Seda (No. 9 last week) all drop one spot each in order to accommodate Rungvisia’s debut.