The 20-year-old 154-pound beltholder also made a sizable jump forward in THE RING’s junior middleweight rankings. 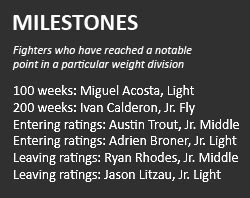 The 34-year-old British contender was dropped from THE RING’s ratings following a performance that was seen as less-than courageous by many fans and some members of the media. Rhodes, who was riding a 10-bout win streak going into the Alvarez fight, was expected to make more of his second chance at a major belt, which was 14 years removed from his first title challenge.

“Regardless of whether Ryan Rhodes was wildly overrated or Saul Alvarez was significantly underrated, their bout clearly demonstrated that Alvarez is progressing at a rapid pace,” said Nigel Collins, Editor-in-Chief of THE RING magazine. “Against Rhodes, ‘Canelo’ exhibited a vastly improved defense, especially for a fighter who, until recently, seemed dangerously easy to hit.”

Alvarez’s tendency to walk into his opponents’ punches led most observers to believe that he would be overwhelmed when he challenged the top fighters of the 154-pound division, such as Miguel Cotto (THE RING’s No. 1-rated junior middleweight), Kermit Cintron (No. 2), and Alfredo Angulo (No. 3).

Now many fans, and even some of the more skeptical members of the press, view those potential fights as competitive matchups.

Alvarez (No. 9 last week) soars to No. 4 on the strength of his dominating, 12th-round TKO of Rhodes (No. 4 last week). Rhodes’ exit makes room for Austin Trout to debut at No. 10. Trout’s entrance bumps up Cornelius Bundrage (No. 10 last week) to No. 9.