16
May
by Michael Rosenthal 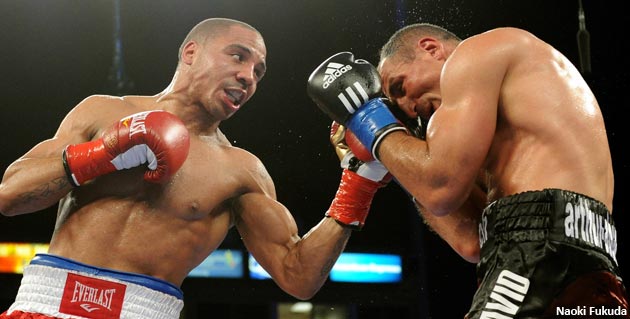 Andre Ward: The Super Six World Boxing Classic finalist could be developing into the most-dominating fighter in the world. He has now fought four consecutive 168-pound contenders and handled them all fairly easily, including a one-sided decision over Arthur Abraham in a Super Six World Boxing Classic semifinal on Saturday. Ward is still developing but has the ring savvy and poise of a veteran champion, unusual characteristics that could lead to a long reign atop pound-for-pound lists. He’s not exciting to watch, which could prevent him from becoming a true star, but aficionados will recognize the former Olympic gold medalist for what he is becoming: One of the best fighters of his time. Next victim: The winner of the June 4 semifinal between Carl Froch and Glen Johnson in the fall.

Arthur Abraham: The Armenian-born German was an illusion. The former middleweight titleholder dominated a long list of solid, but limited 160-pounders with his unusual power and ferocity, which is why he was deemed one of the favorites to win the Super Six even though he was moving up in weight and opposition. To say he fell flat is a gross understatement. Abraham opened the competition with an impressive knockout of fast-fading Jermain Taylor but then lost to Andre Dirrell, Carl Froch and Ward, which exposed him as a crude brawler who can’t handle an opponent with world-class skills. What now? He might be able compete with second-tier 168-pounders, such as titleholders Robert Stieglitz and Dmitri Sartison, but he’ll never be an elite super middleweight. 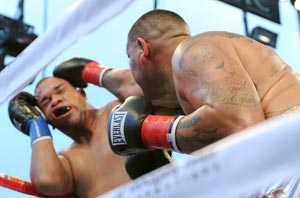 Chris Arreola: We shouldn’t get carried away. The heavyweight contender didn’t look like a heavyweight version of Manny Pacquiao when he stepped into the ring to fight capable Nagy Aguilera on the Ward-Abraham card. But he looked like a new man after weighing in at 234 pounds, 15¾ fewer than his previous fight. And his performance reflected his new commitment to training, as he must’ve thrown 200 punches in two-plus rounds of mayhem. Few heavyweights are able to duplicate that kind of output. And he doesn’t seem to have shed any power as he shed pounds; Aguilera was on his out when the fight was stopped. Arreola is still too easy to hit (hint: move head) but the punching machine who fought Saturday will be tough to beat by anyone not named Klitschko.

Sharif Bogere: We knew about the Ugandan’s unusual Lion-themed ring entrance. We knew about his solid amateur pedigree. We knew about his skills, athleticism and speed. Now we know about his guts. Bogere fought through a horrible cut on his eyelid, a dozen or more painful head butts and the fierce determination of a physically stronger opponent in Ray Beltran to win a unanimous decision in a 10-round lightweight fight on national television Friday night. The 22-year-old African will have emerged on Saturday morning extremely sore but also a better fighter, a typical result of such hard-fought victories. It’s still too early to anoint Bogere a future star because of his relative inexperience but he seems to have all the ingredients. He will be fun to watch going forward. 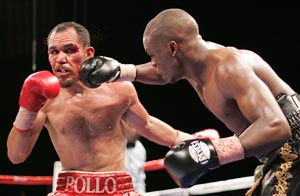 Ray Beltran: The Mexican-born Angeleno was best known going into his fight against Bogere as one of Manny Pacquiao’s main sparring partners. Now, more than ever, he’s known as a capable fighter in his own right. He lost a decision but won hearts, which can be more important than a victory. He took a legitimate contender to hell and back in one of the most-entertaining fights of the year. People won’t forget that. And he probably could’ve won the fight. I thought he was too passive at too many junctures of the fight, which allowed Bogere to outwork him. Beltran gave a lot. Had he given just a little more, he might’ve had the biggest victory of his career. As it was, he earned the right to fight another big-name opponent on national television. Let’s hope the powers that be in the sport recognize the obvious.

Kendall Holt: The former junior welterweight titleholder proved with one massive left hook on national television Friday night that he’s not quite finished. Holt stopped Julio Diaz at 2:37 of the third round in Santa Ynez, Calif., his biggest victory since he outpointed then-unbeaten Demetrius Hopkins in December 2008. He followed that with losses to Timothy Bradley and Kaizer Mabuza, which raised questions about whether he remained an elite fighter. He said he lost focus after he won his title in 2008 but has it back. Maybe he does. We probably shouldn’t read too much into his victory over Diaz, who seemed to be wide open for a big shot. Holt got it done, though. That was a big step in the right direction.

Julio Diaz: The former two-time lightweight titleholder isn’t necessarily finished. He has bounced back from setbacks in the past, even brutal knockouts. He won his titles after he was stopped by Juan Valenzuela in one round in 2002. He won his second belt after Jose Luis Castillo KO’d him in 10 in 2005. And he has had a few solid victories after Juan Diaz stopped him in nine in their much-hyped, all-Diaz title-unification bout in 2007. He is resilient. That said, it will be difficult to rebuild this time. The brother of Antonio Diaz and his trainer, Joel Diaz is 4-4 in his last eight fights, including three losses by knockout. And he’s 31, normally not an age to be rebuilding a career. The good news is that he looked pretty good before the knockout, although he needs to work on his defense. He isn’t shot. Stay tuned.

Cristian Mijares: The little Mexican looked to be all but finished in 2009, after he had been knocked out by Vic Darchinyan and lost back-to-back decisions to Nehomar Cermeno. A one-time member of some exclusive pound-for-pound clubs quickly faded from our consciousness. Mijares has rebuilt his career nicely if quietly, though. He has won six consecutive fights and regained a junior bantamweight by outpointing Juan Alberto Rosas in December. And won his first defense on Saturday in Durango, outpointing Carlos Rueda. Mijares might never again be a pound-for-pound candidate but overcame adversity to prove he remains an elite fighter.

Ward, when someone asked promoter Dan Goossen when and where the Super Six final will be: "MGM, baby … please … please … PLEASE … c'mon Dan." Yes, Ward is dying to fight in Las Vegas for the first time.