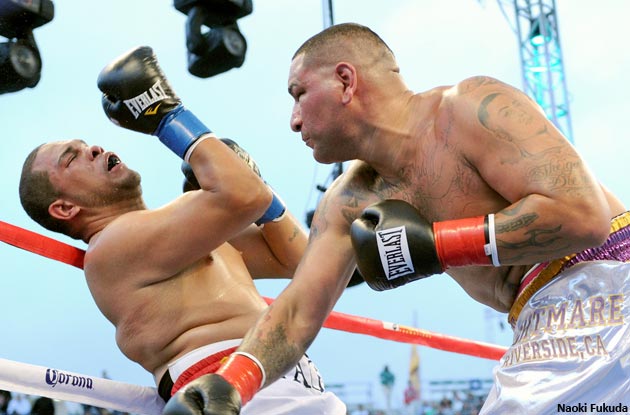 CARSON, Calif. — Heavyweight contender Chris Arreola stopped Nagy Aguilera in the third round of an entertaining scrap that topped the undercard of the Andre Ward-Arthur Abraham super middleweight title bout at The Home Depot Center in Carson, Calif., on Saturday.

Arreola (31-2, 27 knockouts), who looked trim at 234 pounds, the lightest he’s weighed in almost four years, overwhelmed Aguilera (16-6, 11 KOs) along the ropes with a series of left hooks and smashing rights that prompted referee Raul Caiz Jr. to stop the bout at 1:58 of the round even though the clearly groggy Dominican Republic native was punching back.

The fans in attendance did not complain about the stoppage. They got their fill of sustained violence with the two and half rounds of action.

Arreola, of Riverside, Calif., took the fight to Aguilera, of Newburgh, N.Y., from the opening bell and to the pleasant surprise of the fans and ringside press, the quick-fisted Dominican fired back with quick one-twos to the head and slimed down body of the local favorite.

Arreola used the first round to steadily cut the ring off, obviously looking press Aguilera to ropes. He accomplished this mission at the start of the second, which sparked a full minute of viscous toe-to-toe exchanges that thrilled the fans.

However, Aguilera could not keep up the fire fight and backpedaled on unsteady legs as Arreola stalked him for remainder of round. Arreola finally pinned Aguilera near a neutral corner at the start of the third and rained haymakers on his game-but-outgunned opponent until the referee had seen enough.

“He’s tough but I was better,” said Arreola, whose weigh has fluctuated between 245 and 260 pounds in the past three years. “I could’ve done better. I guess I’m getting used to (the lighter) weight, getting used to my punches.”

Arreola said that he had more speed and was able to punch more than usual weighing under 240 pounds.

“I have no idea how many punches threw,” he said. “I just know when threw I them, I could feel them landing. I felt I had more zip to my punches.”

In the last bout before the main event 2008 U.S. Olympian Javier Molina (6-0, 4 KOs), of Norwalk, Calif., looked sharp in shutting out very tough and game Danny Figueroa (3-2, 2 KOs), of Hastings, Minn., over four rounds in a junior middleweight bout.

Molina, who has been inactive due to chronic hand injuries, was able to throw his rehabbed right hand at will en route to out pointing Molina by unanimous scores of 40-36 (x3).

The rest of the undercard featured undefeated up-and-comers dominating journeyman.

Junior welterweight prospect Andrey Klimov, of Los Angeles by way of Russia, (11-0, 6 KOs) stopped Ty Barnett (18-2-1, 12 KOs), of Washington, D.C., in the third round of a scheduled six rounder that kicked off the nine-bout card.