12
May
by Michael Rosenthal

Ray Beltran could relate to Shane Mosley as he watched the skittish 39-year-old squirm his way out of actually fighting Manny Pacquiao last Saturday in Las Vegas.

Oh, he was as disgusted as anyone with Mosley’s reticence to exchange punches. The mild-mannered fighter said he wouldn't blame those who suffered through his lack of effort if they used the term “f—–g pu—y" to describe Mosley.

He also understood what Mosley was feeling, though. Beltran is one of Pacquiao’s main sparring partners. 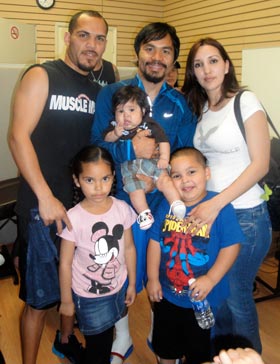 “The thing about Manny is that he’s not like a regular fighter,” he said. “He is in front you but he’s not there to be hit. It’s hard, I’m telling you, f—–g hard. Mosley couldn’t find Manny so he felt dominated. He felt like he could do nothing.

That’s one reason Freddie Roach has Beltran work with Pacquiao: He’s not afraid to mix it up with the king of boxing.

Beltran has been working with Pacquiao for most of the past decade, helping the No. 1 fighter in the world to prepare for some of the biggest fights in recent years as one of the most-reliable sparring partners anywhere.

The native of boxing-rich Los Mochis, Mexico, is more than that, though. He’s a successful fighter in his own right.

Beltran is paid to help Pacquiao prepare for his next fight but it also works the other way: Pacquiao helps Beltran prepare. He fights unbeaten prospect Sharif Bogere on Friday night in Primm, Nevada, on Showtime.

“I’m not there just to get my ass whooped,” he said. “I take advantage of the situation to get ready for my fight. Sometimes I’m there sparring just to spar because I don’t have a fight. Now I have a fight. I’m getting focused.

“… And (sparring with Pacquiao) helps a lot. Like I told you, after sparring with him, sparring with other guys is a lot easier. He pushes me to another level, makes me work harder.”

Bogere (19-0, 12 KOs) is a former amateur star from Uganda who now lives and trains in Las Vegas. He’s a complete fighter – skillful, quick, athletic and powerful, lacking only experience at the highest level. He's a legitimate prospect.

“Ray has his hands full,” one knowledgeable observer said.

Beltran doesn’t blink at that notion. The 29-year-old father of three probably doesn’t have the natural gifts of Bogere but he shouldn’t be underestimated.

He grew up in terrible poverty in Los Mochis, sometimes eating out trash cans to survive. To survive that sort of childhood breeds a certain toughness in a man, a willingness to make the sacrifices in the ring required to win.

In that sense, he can’t relate to Mosley.

“I wouldn’t feel good if I was him,” he said. “I think people would respect me more if I got knocked out but tried. C’mon, you’re a fighter. Sometimes you have no options; you have to take chances.

“I think it’s better to lose trying than walk away in shame.”

Mosley seems to have lost his hunger long ago. Now, in a position to make a lot of money when he fights, it’s all about business. A $10 million payday certainly eases the pain of an embarrassing defeat.

Beltran isn’t in that position. He needs to make a living to feed in family, including a 5-month-old baby. That’s powerful motivation.

Plus, pushing 30, he doesn’t know how many more chances he’ll have to become known for more than just being Manny Pacquiao’s sparring partner.

He has dreams of becoming a champion, too. And beating a respected fighter like Bogere would be a nice step in that direction.

“And I’m ready. I trained hard. And when you train hard, good things happen in the ring.”

One thing is certain: The opponent Beltran will face on Friday is not as good as the opponent he faces every day in the gym. That has to work in his favor.