LOS ANGELES – Ricardo Mayorga is 4-4 in his last eight fights. He hasn’t beaten an elite opponent near his prime since his back-to-back victories over Vernon Forrest in 2003. His record is a pedestrian 29-7. Clearly, at 37, he is no longer the fighter he was.

Yet here is, about to face the popular Miguel Cotto in a high-profile – and lucrative — fight Saturday night in Las Vegas on pay-per-view television.

To what can we attribute that? Easy: His mouth.

The street-wise Nicaraguan won’t go down as one of the greatest fighters of his time, although he was a damned good one, but the trash talker par excellence might have no peer in his era when it comes to self promotion.

You decide whether it’s real or an act – or a little of both.

“He’s the best I’ve ever seen,” said Emanuel Steward, Cotto’s trainer. “He gets me mad at press conferences. There are no limits. He gets up and starts talking about what he’ll do to your wife or your friend. He’ll say your mama’s ugly. And he’s serious.

“It may be part hype but I think he also believes it. Either way, it’s very effective.”

I was in Mayorga’s dressing room before he fought Fernando Vargas in 2007 for a story I working on. He was very quiet, very serious during the time leading up to the fight, in part because he was focused on the fight and in part — I believe — because it’s his nature. 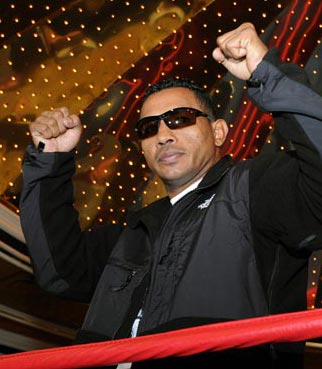 When cameramen came into the room a few minutes before his ring walk, though, he changed completely. His eyes came to life, he became animated and he spewed amusing nonsense for several minutes as onlookers laughed.

Then, when the cameras went off, he went back to the silent fighter of a few minutes earlier.

The point? He knows what to say and when to say it to maximize impact, to sell himself and the fight to amused fans. Mayorga is a born trash talker but clearly this is something to which he has given a lot of thought.

“I think it was real in the beginning,” said publicst Alan Hopper of Don King Promotions, which has handled Mayorga for much of his career. “I think he really thinks, ‘I’m the tough guy from streets of Managua.’ He would try to intimidate opponents before he went into the ring.

“But after he started to make a lot of money, he started to realize he’ll make even more money if he talked more. So he kept doing it. Now he’s a sort of a legend in the Spanish-speaking community.”

Mayorga can go too far, probably his way of trying to get under the skin of his opponent.

For example, Mayorga directed nasty comments directly to Cotto’s mother at news conferences in New York and Puerto Rico. He said to her in Puerto Rico: “You’re suffering is almost over. You won’t have to watch your son get beat up the way he did against Antonio Margarito and Manny Pacquiao anymore, because I’m going to retire him once and for all.”

Cotto is protective of his mother, particularly since the recent death of his father. He didn’t appreciate Mayorga’s antics.

In Los Angeles, during the final news conference before heading to Las Vegas, Mayorga continued to bait him. Cotto stared straight ahead straight faced as Mayorga ranted and raved, though, refusing to buy into it.

And when it was his time to speak, Cotto made it short and sweet. He called Mayorga an “idiot.”

Cotto wouldn’t acknowledge Mayorga’s unusual ability to market himself in a sport in which most participants talk with their fists and not their mouths, self-promoters like Muhammad Ali and Naseem Hamed being the exceptions. He said, “No one really wins when he acts like that.”

But Cotto did reveal that he has seen another side to Mayorga, one that even he believes is evidence that the crazy Nicaraguan isn’t necessarily so crazy.

“The first thing he did a few minutes ago when he entered the door,” said Cotto, who ran into Mayorga before the news conference in L.A. began, “was come to the table and say hi to everybody here … in a gentleman way. I think he just tries to sell himself.”

Will Mayorga admit that, thus blowing his cover?

He wouldn’t do so in the dressing room before the Vargas fight. I asked him while his hands were being taped whether his schtick is nothing but part of a grand marketing campaign to land him big fights and earn him a fortune.

He paused, looked at me and would only say through a translator: “I’m crazy. I was always crazy.”

He was more forthcoming at the L.A. news conference, though. I asked him the same question.

“God gives us talents and abilities and we exploit them the best we can,” he said. “That’s my response to that. Don King is a better promoter than (Cotto’s promoter) Bob Arum. And certain fighters are better promoters than other fighters.

“… I’m not that crazy or sick in the head. I just like to mess around. I’m happy. In the circus, for example, every clown has his role. I play the crazy role because I like it.”

And because it works.