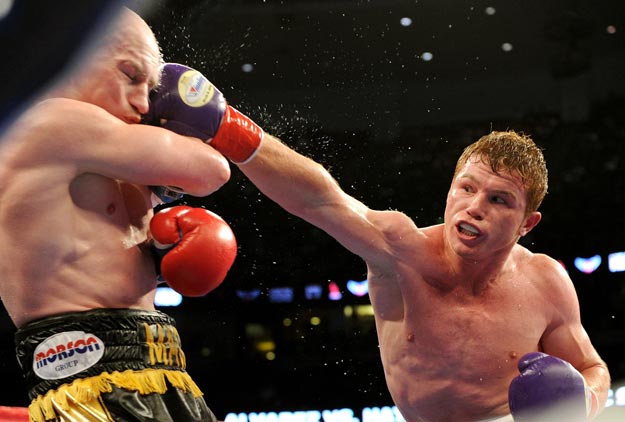 ANAHEIM, Calif. – To Saul “Canelo” Alvarez and those close to him, it was another step in a blossoming career. To many fans, it probably was a disappointment.

Alvarez, obviously much bigger and stronger than opponent Matthew Hatton, imposed his will on the Englishman on Saturday at the Honda Center. He landed hard combinations and painful-to-watch body shots throughout a one-sided fight.

The 11,674 fans on hand — almost all of them rooting for Canelo — didn’t get what they came for, though: A spectacular performance from the fighter deemed by some the next Mexican star.

No knockdowns. No knockout. Just a shutout decision – 119-108 on all cards — for Alvarez, who won his first major title in the process.

That’s not a bad night for most fighters. Most fighters aren’t Alvarez, though. Most fighters haven’t been anointed “The Chosen One,” as his promoter, Oscar De La Hoya, has dubbed Alvarez. 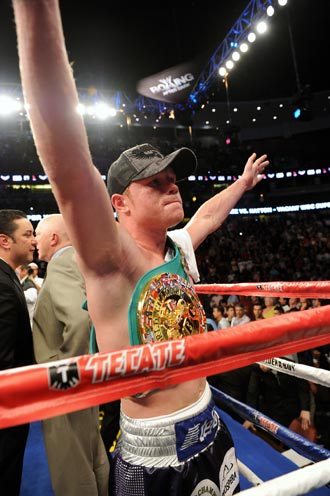 Indeed, we shouldn’t be too hard on Alvarez, who is a mere babe by boxing standards at 20 years old. His hype is ahead of his accomplishments but he continues to grow and do what he’s supposed to do – win.

And Hatton deserves credit for making Alvarez’s night difficult. The younger, less-talented brother of Ricky Hatton absorbed punishing shots at many junctures of the fight, at times appearing to be finished the fans — sensing something dramatic — cheered wildly.

However, as a result of his conditioning and sheer determination, he somehow was able to withstand the onslaughts and continue fighting.

Hatton (41-5-2, 16 knockouts) also frustrated Alvarez (36-0-1, 26 KOs) by holding him whenever he found himself in trouble, particularly in the second half of the fight. Clearly, he was determined to finish on his feet by any means possible.

“When I hurt him, he held onto me. That’s what crafty fighters do,” Alvarez said.

Hatton, who arrived late to the news conference because a cut above his left eye was being stitched up, had nothing but praise for his foe but said he never really had a chance because of the size difference.

“For someone 20 years of age, he’s a remarkable fighter,” he said. “I think he’ll go on to do wonderful things in the sport. I gave it me best. … He was just too big, really.”

Alvarez quietly entered the record books by winning the vacant WBC belt, although many observers questioned whether it should’ve been at stake given the modest accomplishments of the fighters.

Still, the bottom line is this: Alvarez became the youngest fighter ever to win a junior middleweight title. Fernando Vargas was 21 when he won his 154-pound title.

“Let me tell you: Today, history was made,” De La Hoya said. “He became the youngest champion in the history of boxing in his division. Now he’s a champion.

Yes, it’s a difficult road. A 20-year-old boxer with very limited amateur experience wins every round against a more-experienced European titleholder and people leave disappointed.

And Alvarez himself seemed to be among that group.

Of course, he was pleased to win the fight and his first of what could be multiple titles but he wasn’t particularly jubilant at the post-fight news conference.

He seemed to understand that defeating a fighter as limited as Hatton – and failing to knock him out — isn’t the type of performance that will make him a household name. He also is savvy enough to know that he claimed a title before his time.

Most important, he seems to understand that this was just one step in a long process. The most-appropriate path will be to keep an even keel; don’t get too down or too excited no matter what happens in the ring.

“It’s all a learning experience,” he said.

And, finally, it should be noted that Alvarez’s greatest accomplishment on Saturday probably was neither the victory nor his first major title but the number of fans in the arena, the second-largest crowd ever for a boxing match in the arena.

Seems the fans have made him The Chosen One, too. And even a less-than-thrilling performance on one night isn’t likely to change that.