ANAHEIM, Calif. — Adrien Broner’s nickname is “the Problem” and that’s what the lightweight prospect’s style was for Daniel Ponce de Leon, whom Broner defeated via unpopular unanimous decision on the Saul Alvarez-Matthew Hatton undercard on Saturday.

Broner, who won by scores of 99-91 and 96-94 (twice), gave the former 122-pound titleholder from Mexico fits with his speed, defensive skills, punching accuracy and occasional lateral movement. 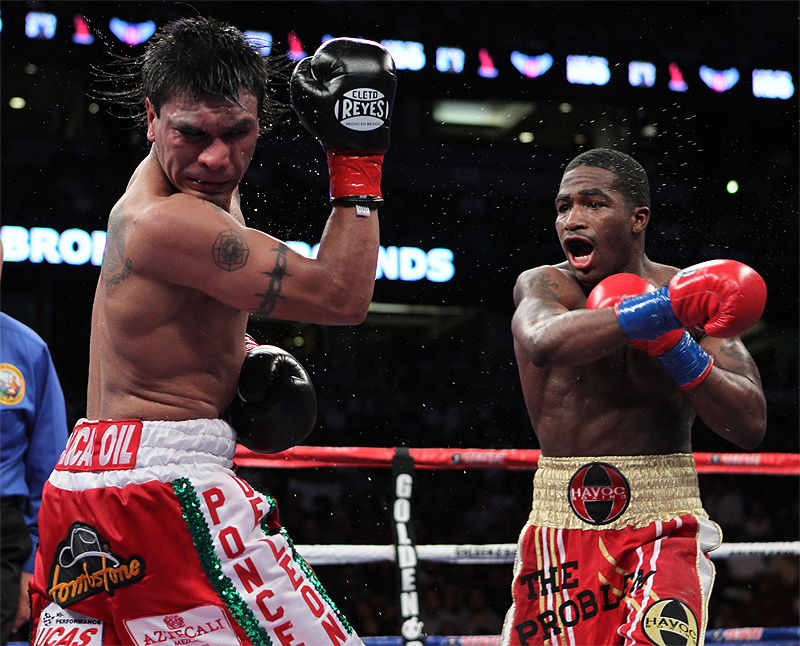 However, the 21-year-old Cincinnati native’s style might also be a problem for his future marketability. Broner (20-0, 16 knockouts) outpointed the most experienced foe of his 2¾-year career, but the former amateur standout did more posing than punching in the majority of rounds.

De Leon, who was far more cautious than usual, had a part in the lack of action in the HBO-televised 130-pound 10 rounder, but it was Broner who was making his debut on the premium cable network. He was the one who needed to make a positive impression. He is the young up-and-comer who was basically auditioning for future appearances on HBO.

De Leon has been to the big dance. He’s won a major title, he’s fought on HBO before. If Broner wanted to let fans know that he’s a future titleholder and an HBO-caliber fighter, he needed to let his hands go a lot more than he did.

If not for the sake of his future popularity then because physics and common sense demanded it.

Broner was the younger, bigger, faster, stronger and more talented fighter. Why did he hold back so much?

“He’s a great fighter so I had to be careful,” Broner said of de Leon after the fight. “I was focused mentally. I stayed true to our game plan and listened to my coach.”

Broner was accompanied by former junior welterweight champ Aaron Pryor into the ring prior to the fight. Those who watched the bout wished Broner was listening to “The Hawk,” a hall of famer renown for his relentless two-fisted style, between rounds.

De Leon (41-3, 34 KOs) would have appreciated that. The heavy handed southpaw may have been able to hurt his naturally larger opponent had there been more exchanges.

The 30-year-old veteran, who was more active than Broner (but not as accurate), still believes he did enough to win the fight.

“I thought won seven out of the 10 rounds,” de Leon said. “The big difference was the weight. He was too big. I could feel the difference, although I didn’t feel his power.

“I’m going to go back down to featherweight.”

He’ll have less problems finding a good fight there.