Super Six semis in May? 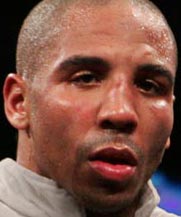 May could be a very big month for boxing.

Manny Pacquiao, the biggest boxing attraction in the world, already is scheduled to fight Shane Mosley on May 7 in Las Vegas.

And now it appears that the semifinals of the Super Six World Boxing Classic — Andre Ward-Arthur Abraham and Carl Froch-Glen Johnson — also will take place on one of the next three Saturdays that month.

Dan Goossen, Ward's promoter, confirmed that May is the likely month for the semis but said he was still working on a date and location for his fighter's bout.

Also, the fights are likely to take place in separate locations and won't necessarily occur on the same Saturday.

Ward won his two fights in the Super Six, outpointing Mikkel Kessler and replacement entry Allan Green. Abraham is 1-2, stopping Jermain Taylor before being DQ'd against Andre Dirrell and losing a decision to Froch.

Froch is 2-1, beating Dirrell and Abraham but losing a decision to Kessler. Johnson, another late entry, outpointed Green in his only tournament fight to advance to the semis.