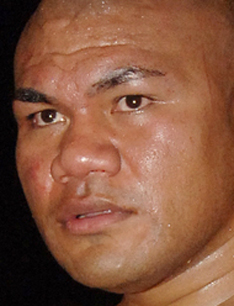 When we think of David Tua, we think of utter destruction. The problem is that we haven’t thought of him for quite a while.

Tua, once one of the most-important heavyweights in the world, took his leave from sport for two years because of a nasty split with his managers. Many of us figured he was through, in part because of his age (now 37) and the fact he hadn’t had an important victory since he knocked out Michael Moorer in 2002.

Yet here he is, the same short but wide – and oh so powerful – slugger two fights into a comeback with his sights set on the heavyweight title that eluded him when he was in his prime. He faces Monte Barrett on Saturday in Atlantic City, N.J., on pay-per-view TV.

“I want to enjoy each fight one at a time,” said Tua, a Somoan-born resident of New Zealand. “I’m in a real good place mentally, physically, spiritually. That’s how I’m going to approach the great sport of boxing from this point on.

“And, yes, I have dreams and hopes of getting another opportunity to challenge for a world title and hopefully winning it but I know that’s not possible if I don’t win the fight in front of me.”

Tua (51-3-1, 43 knockouts) was once one of the most-popular and respected heavyweights in the world because of his reckless style and one-punch knockout power, which laid waste to four world titleholders – John Ruiz (first round), Oleg Maskaev (11th round), Moorer (first round) and Hasim Rahman (10th round).

However, he failed miserably in his only shot at a world title, a pathetically one-sided decision against Lennox Lewis in 2000 in which Tua did next to nothing.

He had a few more good performances – including the knockout of Moorer – but was never perceived in quite the same way after the Lewis debacle. He took two years off (2003-05), came back and beat a string of marginal opponents, and then left again for two years beginning in the fall of 2007.

Tua didn’t want to get into the details of the problems he had with manager/trainer Kevin Barry and financial manager Martin Pugh but it has been reported that a dispute over – what else? – money resulted in an ugly split. The experience seems to have worn him down to some degree, one reason he stayed away from boxing.

He didn’t know himself whether he’d ever get back into a boxing ring.

“I didn’t ever think I’d see the light at the end of the tunnel,” he said. “I never thought I’d be able to break through to the other side, so it’s quite humbling to be speaking to you and talking about boxing. It’s a great honor to be given a second chance.”

Tua seems to be a new man. He apparently is past the problems with his former managers and, it seems, is a stronger man having survived his troubles. He also seems to be more mature. Tua was never disliked but he could be cocky, a trash talker, which he looks back on now and is embarrassed.

“What the hell was that?” he said.

Trainer Roger Bloodworth, who has known Tua his entire career and is working with him now, said his prot├®g├® has grown up.

“I think the biggest difference in David right now is his mental maturity,” Bloodworth told EastSideBoxing.com. “He’s been through a lot. He’s had a lot thrown at him and he’s been able to stand up under all of the pressure and I think he’s become just more mature as a person.”

But can he still fight?

Tua proved he remains the king of the heavyweights in New Zealand with a brutal second-round knockout of Shane Cameron in his first fight back, in October, and then easily outpointed Friday Ahunanya in March.

These aren’t elite heavyweights, though. Neither is Barrett (34-9, 20 KOs), a one-time contender who is 39 and badly faded. He has lost his last three fights, albeit to top-flight opponents. Tua shouldn’t have too much trouble on Saturday night.

The question is: How will he do against the top heavyweights?

Tua feels good. The positive aspect of his two-year hiatus (after another two-year hiatus a few years earlier) is that he has less wear and tear on his body than most 37-year-olds might. His weight is good. He weighed in at 237¼ pounds (107.8kg), about what he weighed for many of his biggest fights.

He can still move pretty well for a wide body. He almost certainly has retained his power, particularly that left hook. And Bloodworth says he’s more versatile than he’s ever been.

Still, the thought of him winning a major heavyweight title – particularly against one of the Klitschko brothers – seems like a longshot. He’d have the same problem so many others do: His relative lack of height: He’s only 5-10 (178cm). Tua would have a better chance against David Haye but he’d have get into a long line of men who would a shot at the Briton.

And that’s OK with Tua, at least for now. He wants to enjoy the fight with Barrett and worry later about what comes next.

“I’ve mapped out a good, solid four or five years as a time limit,” he said. “It’s about being patient, about being smart, about staying on top of things. ÔÇª I gotta win each round, each fight. That’s the only thing I think about. Then, when the time comes to walk away, I’ll be happy regardless of what happens.