Chavez dominates Duddy to 12-round decision 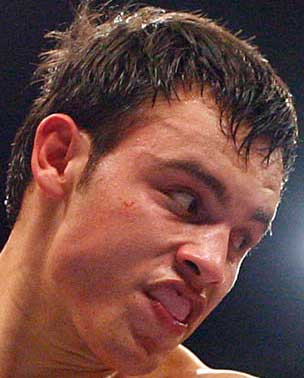 Julio Cesar Chavez Jr. brutally punished and outclassed John Duddy over 12 one-sided rounds, scoring a unanimous decision over the ultra-tough Irishman at the Alamodome in San Antonio on Saturday.

Chavez (42-0-1, 30 knockouts), who won by scores of 120-108, 117-111 and 116-112, put forth the best performance of his career. The son of the Mexican legend boxed well from a distance using a hard jab and accurate right hands and he dominated in close with uppercuts and hooks. The 24-year-old up-and-comer punched with power, precision and impressive volume for 12 rounds.

Duddy (29-2, 18 KOs) was game throughout but too tough for his own good. The native of Ireland never went down but he was repeatedly rocked by Chavez. Duddy had his best moments in the second round, when he pressed Chavez to the ropes and outworked the Mexican star, and in the sixth when he rocked “Junior” with a right hand.

But for most of the fight, Duddy took a frightful beating from Chavez, who looked like a real contender.

In the co-featured bout, former three-division champ Marco Antonio Barrera returned to the ring after a brief retirement with a solid 10-round unanimous decision over Adailton De Jesus.

Barrera (66-7, 43 KOs) showed the ring savvy one would expect from 20-year vet, plus flashes of his old form, in winning by scores of 100-90, 99-91 and 98-92. Barrera controlled most of the bout with his jab, landed well-timed right hands and occasionally teed off with his vintage body-head hook combinations to the game but ordinary Brazilian.

De Jesus (26-5, 21 KOs) was able to slow Barrera down by utilizing lateral movement, but he never threatened the future hall of famer.

Elizondo was also rocked in the first and third rounds by hard right hands from Martinez, who was in command the entire fight. Martinez dropped Elizondo with a right with 30 seconds left in the fifth round, a left hook at the bell ending the sixth, and hard right with one minute left in the seventh.

Villa was coming off a first round knockout loss to Miguel Angel Garcia in April.

A full ringside report from John Whistler will be posted shortly.