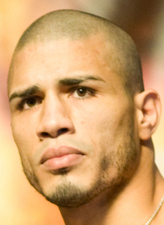 It looked as though Yuri Foreman would have to give up his title due to a knee injury that twice sent him to the canvas in the eighth round of his bout with Miguel Cotto on Saturday, but the brave junior middleweight beltholder got up and fought on until a body shot put him down in the ninth. Photo / Chris Farina-Top Rank

NEW YORK – The 20,272 fans at Yankee Stadium had a lot to talk about after Miguel Cotto knocked out junior middleweight titleholder Yuri Foreman on Saturday night.

Cotto, counted out by some after he was beaten up by Antonio Margarito and Manny Pacquiao, demonstrated that he’s not finished as a big-money fighter by winning a fourth major title in a third weight class.

Foreman might’ve made more fans in defeat than he ever did in victory by refusing to quit in spite of an badly injured right knee, as broadcaster Max Kellerman suggested in the ring immediately after the fight.

And, in one of the more-bizarre moments in recent memory, the fight appeared to over in the eighth round when Foreman’s trainer threw in the towel and people filled the ring but the referee refused to accept the surrender and the action resumed after three minutes.

“It was crazy,” one ringsider said of the bizarre fight, echoing everyone’s thoughts.

Cotto (35-2, 28 knockouts) was winning the fight on all three cards – by four points on one and six on the other two — when the fight was stopped but Foreman (28-1, 8 K0s) certainly was competitive through six rounds.

The Puerto Rican star stalked his perpetually moving foe, effectively landing his hard jab and enough follow up power shots to win rounds. He looked sharp. Foreman, boxing well, landed enough of his own punches to keep it interesting.

And then it got really interesting.

Foreman slipped in the eighth round, aggravating an old bicycling injury to his brace-covered knee. He bravely fought on but, because of sharp pain, couldn’t move as he had earlier in the fight and became relatively easy prey.

Cotto took advantage, landing his most-damaging blows as Foreman did the best he could to fire back. Then the white towel came flying into the ring, thrown by Joe Grier because he was convinced the injury was serious and didn’t want his fighter to take an unnecessary beating, and people began climbing through the ropes.

That appeared to be that. But referee Arthur Mercante, apparently believing an outsider threw in the towel, waded through the crowd and asked Foreman if he wanted to continue and then ordered the ring cleared and the fight resumed after a three-minute break.

Foreman, limping badly and barely mobile, continued to defend himself bravely and survived the round. The end came quickly in the ninth, though. Cotto landed a left hook to the body that sent Foreman to one knee in pain, prompting Mercante to finally end it 42 seconds into the ninth even though Foreman still wanted to go on.

The proud Israeli lost his title but undoubtedly gained some respect.

The former junior welterweight and welterweight titleholder bounced back from his knockout loss to Antonio Margarito by beating Michael Jennings and Joshua Clottey but then was stopped by Pacquiao, which prompted some to write him off as an elite fighter.

The victory over Foreman probably won’t change everyone’s mind but he clearly demonstrated that he remains a skillful boxer, which will earn him more big paydays.

“I proved this night, everybody who said Miguel Cotto was finished, everybody failed,” Cotto said.

Cotto’s doubters were the only ones who failed. Neither of the fighters did.