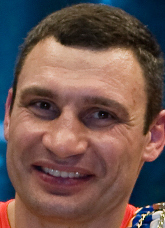 Albert Sosnowski (left) won't be the first questionable challenger when he faces titleholder Vitali Klitschko on Saturday in Germany.

Vitali Klitschko’s defense of some title belt or another on Saturday is big news in Germany, one imagines, and maybe even in all of Europe, where boxing doesn’t have to try nearly as hard to be popular as it does in the United States.

It’s a good thing, too, because Klitschko clearly isn’t trying to please anyone with his fight against one Albert Sosnowski, who is so ordinary he was once shut out by the slightly less ordinary Zuri Lawrence and later drew with one Francesco Pianeta for the European Union heavyweight title, whatever in the hell that is.

No one I’ve talked to is really blaming Klitschko for fighting Sosnowski, mostly because they don’t know about it and couldn’t care less if they did.

But let’s pretend someone does care and is angry with Klitschko for fighting a nonentity, which is how people used to get when someone who called himself the heavyweight champion fought a guy who was such a stiff you could be forgiven for thinking rigor mortis had set in.

“I watched Sosnowski’s fights and must admit that he is a very experienced, quick and tough opponent,” Klitschko said at a press conference, reportedly with a straight face. “He will do anything to get my belt but I promise that this is not going to happen.”

Want to go back farther?

Joe Louis defended against a series of guys so bad they called it his “Bum of the Month” tour. Marciano defended against Don Cockell, Jack Johnson against Battling Jim Johnson, and Gene Tunney against Tom Heeney.

The point: Lots of really bad heavyweights have fought for the title, most of them leaning beforehand on the same type of platitudes Sosnowski strung together when, for almost certainly the first time ever, he found a microphone in his face.

“This is a dream come true, a once-in-a-lifetime chance to fight Klitschko for his WBC title belt,” Sosnowski said. “For me, Klitschko is over the hill. I know that I am the underdog for everybody, but I tell you, Klitschko will regret picking me.”

Here’s the other reason you should give Klitschko a break. He’s faced four guys since ending a four-year retirement: Sam Peter, Juan Carlos Gomez, Chris Arreola and Kevin Johnson. Their combined record going into their fights with Klitschko was 123-2-1, with 91 knockouts.

We can talk all day about how this one was no good, that one was too fat, the other one too old, that one a pacifist, but together they beat 123 guys and combined maybe won a round or two against Big Brother.

What’s he supposed to do? Fall down a couple times to make one of the jokers look better?

If you don’t care about Klitschko-Sosnowski, that’s fine. But if you do, don’t blame Klitschko for the mess. It was like this when he got here.

I love Israel Vazquez as much as the next guy, in part because how many guys do you know that you can call Izzy? But let’s face it: When you’re doing the ring walk and you can look at fans on both sides of the aisle at the same time, you probably don’t belong in a boxing ring. It’s bad enough when a civilian has that look — one eye hunting, the other fishing — but in a fight, it’s just really bad news.

How, you ask? Well, for instance, I’m no doctor, but I’m pretty sure that three rounds in I shouldn’t be able to see any part of a guy’s frontal lobe. After seven or eight rounds, OK. But three? You could have parked a Hummer in that gash over Vazquez’ left eye and still had room for one of Gary Shaw’s sweat suits. ÔÇª

Antonio Tarver is light years more likable as a broadcaster than a fighter, but who picks out his on-air wardrobe — Vazquez?ÔÇª

It’s bad enough that the cretins at the loathsome and reprehensible WBC created the “silver belt.” But the promoters of Marquez-Vazquez IV — Shaw and Golden Boy Promotions — made it part of the show. ÔÇª

From my couch I scored the terrific Abner Mares-Yonnhy Perez fight 115-113 for Mares, but a draw was a perfectly reasonable verdict. ÔÇª

I hear ESPN cut out the final words of referee Robert Gonzalez at the start of Ji-Hoon Kim’s first-round stoppage of Ameth Diaz. After shocking Friday Night Fights viewers by concluding the prefight instructions with, “In the name of the Father, Son, and the Holy Spirit,” Gonzalez reportedly said, “Now get out there and bang one another’s brain stems loose.”

Good news for fans of Ring Theory, the boxing talk show hosted by me and RING contributing editor Eric Raskin: The show is now officially a podcast, which means you can have each new episode downloaded to your mobile device. No more sitting at your computer for an hour listening to us drone on. Now you can listen to us drone on while you’re doing something else. And no more multiple media players or problems from areas outside the U.S.

How things happenÔÇª
Showtime suit: Hey, dork — sports fans like graphics. Right?
Showtime Producer: Huh? Uh, yeah, I guess.
Suit: Good. Call a meeting with your software geeks or whatever and tell them to come up with some graphic or something that’s never been done that we can debut on the Marquez-Vazquez show Saturday night.
Producer: A graphic? Like what?
Suit: I don’t know, come up with something. You’re the producer, for chrissakes. Just tell them to do something cool and computer-y that these boxing freaks will like.
Producer: Computer-y?
Suit: Yeah. You know what I mean. How hard can it be? They’re boxing fans, for chrissakes.
Producer: Um, OK.
Suit: One thing: It can’t be anything like what those prima donnas at HBO are doing. You know, that dumb thing where they show where punches supposedly landed. Totally useless. It’s got to be better than that. And totally different. OK?
Producer: OK. Totally different. Got it. Does it have to be, um, interesting? Or relevant?
Suit: Sigh… Did you hear me use the words ‘interesting’ or ‘relevant’?
Producer: Uh, no.
Suit: Well, there you go. Now make it happen!

Thus was born the Sports Media Punch Chart. Or something like that.

Bill Dettloff, THE RING magazine’s Senior Writer, is the co-author, along with Joe Frazier, of “Box Like the Pros.” He is currently working on a biography of Ezzard Charles.

Bill can be contacted at [email protected]