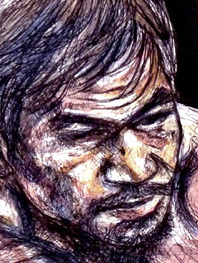 Albie Espinola is a fashion artist from London who also happens to be lifelong boxing fan.

Today, RingTV.com presents Espinola's painting of Manny Pacquiao — who fights Joshua Clottey on Saturday at Cowboys Stadium — and a time-lapse video (below) of him painting it.

Espinola was born in London to Filipino parents. His father often spoke of the great Flash Elorde and other top fights from the Phillipines and he became of fan of such British fighters as Chris Eubank and Nigel Benn, whose war in 1990 got him hooked on the sport.

The Londoner boxed briefly as an amateur but decided to focus on his art. He began to paint portraits of top models, becoming a prominent presence on the fashion scenes in Paris, London and New York. USA Today dubbed him the “fashion artist.”

However, he never lost his love of boxing. He taught the sweet science at a London gym while he worked in fashion public relations and produced fashion shows. And he has followed the sport religiously.

His favorite fighters today are Pacquiao and Floyd Mayweather Jr., both of whom have been subjects of his paintings. The Pacquiao painting is presented here. Mayweather will come later.