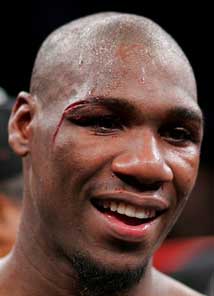 The bad news last week was that Kelly Pavlik had to again pull out of his fight with Paul Williams. The good news is that Williams is going to fight on Dec. 5 anyway. Good for him.

At this writing, Williams’ promoter, Dan Goossen, has been understandably non-committal about who will replace Pavlik; These things take time. Junior middleweight Sergio Martinez has come up several times and he’s an excellent choice; he’s very good and deserves a big fight after the screwing he got against Kermit Cintron.

If that doesn’t work out, Williams can compete reasonably comfortably in three divisions, he says, so there’s no shortage of interesting opponents for him. Here’s a look at eight.

Good News: This is a big fight and that’s what Mosley’s been begging for all along isn’t it? Forget Andre Berto. Any fight that takes as long to put together as that one has isn’t worth it. Not when Williams is available.
Bad News: Williams may finally have gotten to the point where he’s not able to get down to 147 anymore, and it’s unlikely Mosley would agree to a weight any higher.
Likelihood: Highly unlikely. Williams is a terrible style matchup for Mosley, and Mosley knows it.

Good News: Cintron, who seems an emotional type, should be flying high after wins over Alfredo Angulo and Juliano Ramos.
Bad News: I don’t see any. Do you?
Likelihood: Why not? Cintron just beat Ramos over the weekend, so he’s in shape. He can take off a week or two then get right back into the gym.

Good News: Sturm isn’t just a middleweight titleholder, he’s also the Ring’s top-rated contender at 160 pounds.
Bad News: You couldn’t fill a phone booth with the number of Americans who would know Sturm if they bumped into him on the street, so the fight would have to take place in Germany to make any money.
Likelihood: Sturm wouldn’t fight Williams if he could carry a crowbar and three of his burlier friends into the ring with him. Forget it.

Good News: You know where I’m going with this: the winner of Williams-Green replaces Jermain Taylor in the Super Six tourney.
Bad News: The weight might be too much for Williams, even though he comes into the ring looking like a cruiserweight.
Likelihood: Almost certainly not. Not even Williams is ballsy enough to make that move. But wouldn’t it be fun if he was?

Good News: The Ring rates Spinks right beneath Williams at junior middleweight. And as he’s gotten older, Spinks has gotten a little more exciting.
Bad News: It’s Cory Spinks.
Likelihood: Very little. And we shall never speak of it again.

Good News: Clottey lost out on a payday against Carlos Quintana when Pavlik bailed. Why not just replace Pavlik with Clottey?
Bad News: Clottey would want a big pay increase to move up and face Williams, but he doesn’t bring many fans to the table.
Likelihood: Unlikely – it makes too much sense!

Good News: Bika, having won the last “Contender” series competition that anyone watched, has some name recognition among American fans.
Bad News: Would be viewed as a huge step down from Pavlik. Also, he’s a big 168-pounder.
Likelihood: Probably very little, but if it happened Bika would make it interesting.

Good News: Another former “Contender” champion stymied and inactive, just signed with high-powered manager Cameron Duncan, who might be able to make it happen.
Bad News: Not a great style matchup for Mora, who still doesn’t get much credit for his win over Vernon Forrest.
Likelihood: Unlikely, but not out of the question.

Good News: Don’t underestimate this guy because you can’t pronounce his name and wouldn’t know him if you married his daughter. He can fight
Bad News: He carriers a poor risk/reward ratio: Because no one in America knows him, Williams would get little credit for beating him and a lot of heat for losing to him.
Likelihood: We hear Dzinziruk is in the running. Don’t be surprised if it happens.

I know Bob Arum has medical reports a half-mile long to prove Pavlik’s infection, but I can’t shake the suspicion that a contributing factor might be a bad case of I-can’t-get-over-getting-my-ass-kicked-by-40-plus-year-old-Bernard Hopkins Syndrome. It’s no swine flu, but there’s a lot of it going around. ÔÇª

Tomasz Adamek had an even easier time with Andrew Golota than I thought he would, so in the absence of another big fight, why not a rematch now with Steve Cunningham? And if not, move up to heavyweight permanently and be done with it. ÔÇª

Just in time for Nicolai Valuev’s upcoming fight against David Haye, biographers have uncovered some old footage of Valuev showing off his considerable musical talent. Check it out: http://www.youtube.com/watch?v=lClaQLsBb-4

Seriously, has anyone analyzed this guy’s DNA? ÔÇª

The first installment of HBO’s Pacquiao-Cotto 24/7 was fairly uneventful save for the revelation that Pacquiao pretty much “calls the shots,” according to Freddie Roach. The dismissive look Pacquiao gave Roach after the trainer interrupted Pacquiao’s lunch with a local politician to say he was leaving also was revealing. And not in a good way. ÔÇª

Thank goodness Victor Fonseca stopped Al Seeger in the ShoBox prelim from Laredo, Texas, on Friday night. If he hadn’t, another fighter would have been screwed over by the loathsome scoring of Texas officials, who inexplicably had Seeger ahead in a fight he clearly was losing.

A verdict for Seeger would have been almost as objectionable as the one Juan Diaz got over Paulie Malignaggi in Houston in August, a controversy (alert: shameless plug on the way) I cover at length in the December 2009 issue of The Ring, which is on sale now. ÔÇª

Speaking of the ShoBox card, new rule: no more pink boxing gloves, no matter how worthy the cause. It’s unseemly. You don’t see pink footballs flying around every other Sunday, and you shouldn’t see pink gloves on guys trying to bash one another’s brains in. ÔÇª

I just mailed in my hall of fame ballot. It did not include a vote for Donald Curry, the speed of whose tumble from supremacy to mediocrity approximated a streaking meteor. You think Roy Jones lost it all at once? The phrase might as well have been invented for Curry.

I didn’t vote for Naseem Hamed either, though I do miss him. Same with Danny Lopez. I did vote for Rinty Monaghan, mostly because I love the name, and Lloyd Marshall, Jose Becerra and Georgie Abrams, and threw up a little when I saw Sven Ottke on the ballot. ÔÇª

Be sure to check out the next edition of Ring Theory, the audio show Eric Raskin and I debuted here at RingTV.com last week. The next show will be available on or about Nov. 5 and along with the usual nonsense, we’ll preview Pacquiao-Cotto and Dawson-Johnson II. Come on, you know you want to.