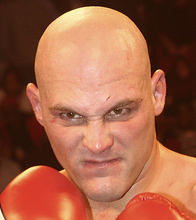 Heavyweight prospect Tony Grano (16-1-1, 13 KOs) of Hartford, Conn., rallied to knock out previously undefeated Travis Kauffman (18-1, 15 KOs) of Reading, Penn., at 2:56 of the fourth round of their scheduled 10-round main event from Santa Ynez, Calif., on Friday.

Grano barely avoided getting knocked out himself in a wild fourth round. Early in the round, he was stung by Kauffman and appeared ready to go.

However, Grano created two breaks to buy some time, once by nailing Kauffman south of the border and again, moments later, after spitting out his mouthpiece.

Those few extra seconds of rest may have been the difference as he came back to hurt Kauffman with a huge right hand. At the end of the fight Grano delivered close to 30 punches, many of which landed and Kauffman went down for the first time in his career. Moments later, it was over.

“I said I was going to take this guy into deep waters and do whatever it took to win and that’s exactly what happened,” Grano said. “Kauffman was tough and had more experience than me, but he underestimated me and I had the bigger heart.”

Kauffman wants to do it again.

“I definitely thought I had him but I let him get away,” he said. “Grano was ready to quit. He was looking for a way to quit. That’s why he hit me low and spit out his mouthpiece. But I let him off the hook. For sure, I want a rematch.”

The opening bout of the Showtime “ShoBox” telecast at Chumash Casino Resort was also an all-action thriller, as bantamweight prospect Chris Avalos (12-0, 10 KOs) of Lancaster, Calif., overcame a bad case of the flu and a determined Giovanni Caro (12-9-3, 11 KOs) of Mexico City to remain unbeaten with a fourth-round knockout at 2:15.