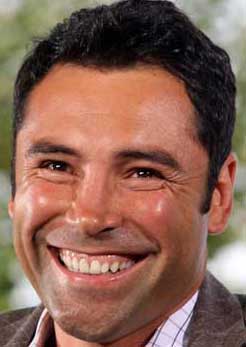 Oscar De La Hoya fought many of the best fighters in the world during his 16-year professional career. In his blog this week, he lists the best he faced in 10 important categories.

Best fighter: Julio Cesar Chavez — He had it all. He could box, he could punch, he had an iron chin. And he had guts. He had the whole package. He wasn’t 25 when he fought me but he was still an elite fighter.

Best boxer: Pernell Whitaker — He was very elusive, very hard to hit. He was very slippery.

Best puncher: Arturo Gatti. — This kid, may he rest in peace, didn’t catch me flush on the chin but his punches were so heavy, heavier than Ike Quartey’s. I don’t know what he had in his hands.

Quickest hands: Manny Pacquiao — His punches don’t come from your basic boxing style; they come from all sorts of weird angles. That’s what makes him difficult.

Quickest feet: Pernell Whitaker — He was very elusive. He could spin you around and not exert much energy doing it. He did it with ease. It was so natural to him. Footwork starts everything.

Best defense: Pernell Whitaker — Again, he was slippery, elusive. It was hard to crack that defense.

Best chin: Julio Cesar Chavez — I hit him with some shots. In our second fight, I said to myself, “My gosh. How can he not go down?”

Best jab: Ike Quartey — He had an incredible jab. The special thing about it was that he threw it from his chin or sometimes he would leave it loose in the air. You wouldn’t notice him throwing it. His jab was very powerful, one of his best weapons. And when it landed, it really hurt. It didn’t sting; it hurt. Like a hammer coming down on you.

Strongest: Fernando Vargas — He just felt strong. It was so hard to handle him. I felt his weight. His punches were heavy and strong. He was solid. We all know what happened there, though: He had a little help.

Smartest: Bernard Hopkins — He is the type of fighter who gets in your head. For our press tour, he was always polite, very nice. No trash talk, no nothing. After the fight, I realized: He did that because he didn’t want me to fight angry, to try to take his head off. At the time I fought him, he didn’t like pressure from his opponent because he didn’t like fighting the whole three minutes. He is one smart cookie.

Oscar De La Hoya’s blog is updated once a week