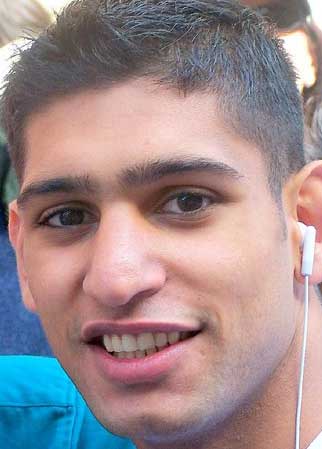 Amir Khan (right), here smashing a right hand off the head of Marco Antonio Barrera, looked sensational bloodying and battering the future hall-of-famer in Manchester, England on Saturday. However, at 35, and way past his prime, Barrera offered no resistance. As sharp as Khan looked, he needs more experience before taking on world-ranked lightweights. Photo by David Martin-Warr/Cleva Media/DKP/FWI/Fightwireimages.com

Fight fans didn’t quite know what to make of the Amir Khan-Marco Antonio Barrera crossroads match when it was first made.

Khan was only one fight removed from an embarrassing first-round knockout loss to unheralded Breidis Prescott. Barrera had not been seen on U.S. TV since a disappointingly lackluster 12-round loss to Manny Pacquiao in October of 2007.

The 35-year-old veteran reportedly looked his age against two rank journeymen in comeback fights. Barrera sustained a nasty cut in the middle of his forehead in his second comeback fight in late January, which further questioned his chances against a speedy 22-year-old lightweight.

However, when odds makers and the media looked at Barrera’s body of work — even his last two losses came to the current No. 1 (Pacquiao) and No. 2 (Juan Manuel Marquez) pound-for-pound best boxers — they found it hard to count the Mexican legend out against Khan, who despite his 2004 Olympic silver medal and obvious athletic ability had never defeated a notable pro opponent during his rise to prominence in the UK.

Perhaps it was the opponent Khan lost to that ultimately prepared him for the best performance of his young career, the bloody one-sided five-round drubbing he gave Barrera in front of the 20,000 fans that packed the M.E.N. Arena in Manchester Saturday night.

Although it was an accidental headbutt that opened one of the worst cuts Barrera’s ever sustained, it was Khan’s blazing hand speed combined with the surgical precision of his straight-punch combinations that determined the eventual outcome of the bout, a fifth-round technical decision after referee Dave Parris ended the bout on the advice of the ringside physician.

It wasn’t the blood that poured from the inch-long gash that was opened in the upper-left area of Barrera’s hairline in the first round that took the three-division champ out of the fight, it was Khan’s skill in implementing his gameplan, which was to keep the older, shorter, slower fighter on the outside and in direct line of rapid fire combinations.

Khan always possessed the size and speed to trouble a smaller veteran, but until Saturday he had never shown the discipline in sticking to a smart strategy that would have suggested that he could out-class an experienced master boxer.

Khan used to get carried away with his offense and lunge in with his chin exposed. Such recklessness cost him against Prescott last September. It could have cost him against even the faded version of Barrera he faced, but one thing fans and the boxing media can assume from Saturday’s performance is that Khan has corrected many of his flaws in the six months since his only loss.

“The loss was a blessing in disguise,” said Khan, who relocated to Southern California to train under Freddy Roach after the Prescott fight. “Freddie has changed me into a real fighter. The training I did in L.A. was to hit and move all the time.”

Khan stuck and moved to bloody perfection against Barrera. Every power punch came off the jab. He worked his way in close, got off with fast shots, and then got out of range with his chin tucked and hands held high to block any incoming counter punches from Barrera, who didn’t have the speed, reach or reflexes to compete.

“It was a beautiful gameplan and he was perfect,” Roach said. “He’ll be my next world champ for sure.”

Khan’s promoter Frank Warren, who made the smart gamble in making the fight, said the goal is now to “get (Khan) into position to fight for a world title.”

Despite his excellent performance, the jury is still out on how soon Khan should go for a world title or even a world-ranked contender.

Khan (20-1, 15 knockouts) has considerable physical tools: height (5-foot-10), speed, hand-eye coordination, and good power. Under Roach’s guidance the British star has tightened his once shaky defense and will no doubt continue to improve his technique.

Barrera, a veteran of 72 pro fights coming into Saturday’s bout, had experience but he wasn’t able to impart any of it to Khan because he was never in the fight.

Championship mettle comes from surviving, adapting to, and overcoming adversity in the prize ring.

In the past, Khan survived knockdowns and shaky moments in bouts against tough-but-second-tier fighters. But against a young fighter who matched his physical tools and athleticism he didn’t.

However, that was then. This is now. Khan has come to expect criticism no matter what he does.

“Since day one I’ve taken criticism,” he said after the Barrera fight. “I shut (the critics) up tonight, I hope. I took a tough fight and I made it easy.”

Can he do the same thing against a world-class opponent who is still in his prime?