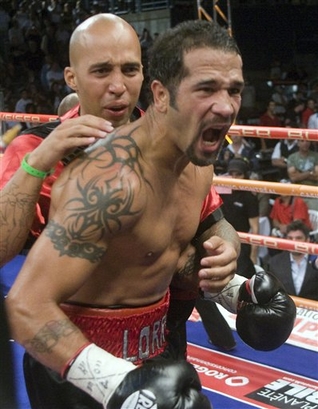 The unfortunate cancellation of the 154-pound match between contender Sergio Martinez and prospect Joe Greene, which was the co-feature to the Jan. 17th Andre Berto-Luis Collazo welterweight title bout, because of kidney stones suffered by Greene has led to a more significant bout that was added to the undercard of the HBO-televised Alfredo Angulo-Ricardo Mayorga showdown on Feb. 14th.

Martinez, who holds the WBC's “interim” title, will now face WBA 154-pound beltholder Daniel Santos, it was announced Friday by Don King Productions, co-promoter of the Feb. 14th card and of Santos.

The Feb. 14th card now becomes a triple header, headlined by the Angulo-Mayorga junior middleweight bout, and supported by a lightweight title bout between unified beltholder Nate Campbell and Ali Funeka, and the Santos-Martinez bout.

HBO, which is also televising the Berto-Collazo fight from Biloxi, Miss., will only show the welterweight title bout on Jan. 17th.