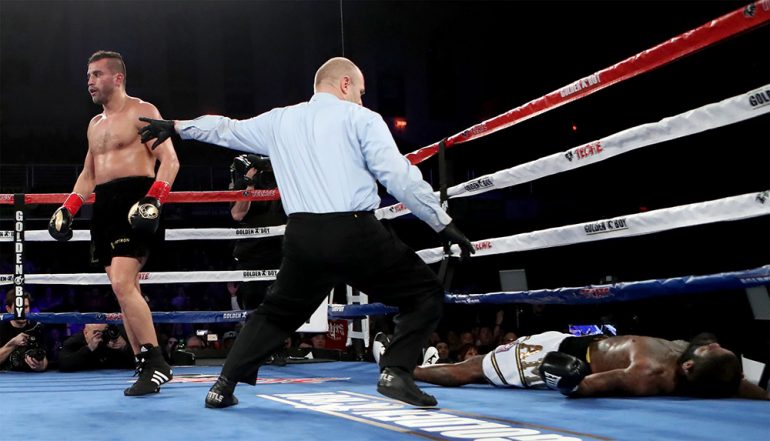 2017 gave us a lot to think about in this category.

We got the Dempsey-esque image of a fighter draped in photographer’s row after getting knocked through the ropes (Sam Eggington KO 10 Ceferino Rodriguez). We saw the fruits of veteran tenacity (Luis Collazo KO 6 Sammy Vasquez) and the dangers of high mass multiplied by high velocity (Yunier Dorticos KO 2 Dmitry Kudryashov and Daniel Dubois KO 1 AJ Carter). Immanuwel Aleem was dropped flat on his back like a carbonite-encased Han Solo after a single left hook from Hugo Centeno. Jermell Charlo alone produced two highlights (KO 6 Charles Hatley and KO 1 Erickson Lubin). Ray Beltran saved his whole freakin’ family with one punch on HBO! (Or at least maybe saved himself from being deported.)

And those were some of the knockouts that didn’t make our top five.

This can get awkward. With so many choices, scrutiny tends to fall more on the quality of the person being knocked out than the person doing the knocking, and deciding which knockout is more worthy than another can start to sound like deciding who deserves to remain conscious. It’s easy to forget that all fighters risk experiencing the chicken dances, faceplants, invisible opponents and other indignities of a disrupted nervous system – and much worse – every time they go to work.

KOs are harsh, though. A Knockout of the Year should stand out, and part of that is being less predictable than backyard watermelon-punching on YouTube (as spectacular as that is, especially in super slo-mo).

Our four runners-up included a fighter who thoughtfully brought a pillow for his victim (Joshua Greer KO 6 James Smith), the latest step in a multidivision conquest (Mikey Garcia KO 3 Dejan Zlaticanin), a finishing combo ripped straight from a video game (David Benavidez TKO 8 Rogelia Medina) and a fight that was over in less time than it took to read this sentence (Zolani Tete KO 1 Siboniso Gonya).

And then there was the winner …

David Lemieux and Curtis Stevens had an important bond going into their HBO-televised battle on March 11 in Verona, New York: They’d both lasted eight rounds against Gennady Golovkin. Stevens was six fights and 3½ years removed from his experience – time enough to accept post-GGG life – but Lemieux had only put two fights between himself and the setback. He was still rebuilding and looking to reassure his fans and promoter that he was the sledgehammer-armed man they knew, loved and paid for.

Stevens was also on a rehab mission. The former “Chin Checker” (a nickname given to him and buddy Jaidon Codrington when both were heavy-handed New York prospects) had notched two wins after a long layoff that followed a decision loss to Hassan N’Dam. For him, the Lemieux fight would most likely be his last shot at rising above gatekeeper status.

Two dangerous punchers meeting at the crossroads in an HBO main event. All it needed was the right finish.

Lemieux was the main aggressor, chopping at Stevens’ body and head with loaded-up hooks. Stevens wasn’t as active but he had moments, using his faster hands to target Lemieux’s temples and find gaps underneath his elbows. It was turning into a good fight.

Midway into Round 3, Lemieux clearly had seen something – or at least had decided to try something. His pace dropped to predatory and his focus seemed to shift from doing general damage to finding a very specific moment (back in the video game analogy, this is where the power bar is building up to a full charge). Stevens cautiously went into reverse.

Lemieux made his move when Stevens’ back was about a foot from the ropes. First was a decoy half-jab, followed by a straight right that stunned Stevens and allowed Lemieux to get in close. Then, as Stevens opened up to throw a left hook (an opening helped by Lemieux cleverly using his already-extended right hand to bat Stevens’ left arm away, thus forcing him to throw a wider, weaker punch), Lemieux launched his own left hook.

Stevens’ punch actually landed first, but did no harm. Not that it mattered. He was unconscious the instant Lemieux’s hammer hit him and remained so on the canvas for a couple worrying minutes before being carried out on a stretcher.

It was a scary knockout. It was also exactly what Lemieux needed for his career, but the boost would be short-lived. Two fights later he would suffer his own loss – of a very different kind, but just as decisive – at the hands of Billy Joe Saunders. As one-sided as that fight was, though, it’s worth remembering that the odds beforehand were even – and worth assuming they were that way because the oddsmakers saw what happened to Curtis Stevens. It’s the sort of knockout that stands out.

PREVIOUS: Fight of the Year

NEXT: Round of the Year

There can be only one

THE RING delivers an award 84 years in the making

For the first time since its inception, our poll ends in a draw

Our 'Best Fighter' results going back to 1980

Celebrated then dismissed, Jorge Linares is back with a vengeance

In the dressing room with Miguel Cotto before his final fight

Out With a Bang

Our readers dish out compliments and complaints

Fighter of the Year(s)

'The Fighting Carpenter' reveals all

Commandment No. 1: Thou shalt not quit

As good as it gets

Return of the king

The buzz is all about BJ this month