‘Ali vs Stevenson: The Greatest Fight That Never Was’ 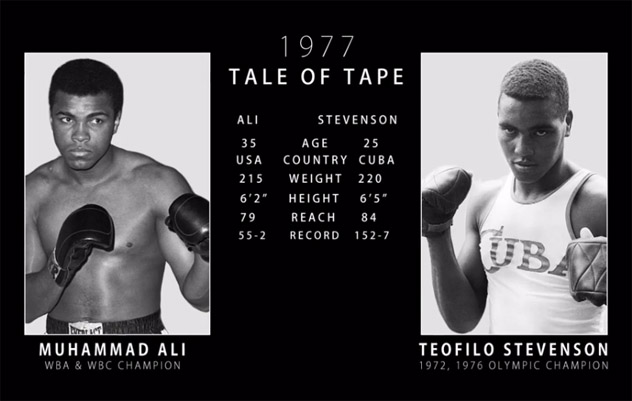 A while back we featured an interview with author Brin-Jonathan Butler talking about his new book, “A Cuban Boxer’s Journey.” It follows the case of Guillermo Rigondeaux as he goes from being one of the most skilled amateur boxers Cuba has ever seen, to national pariah, to one of the most skilled pro boxers the world has ever seen, to cable-TV pariah.

Central to Rigondeaux’s story is the comparison to Teofilo Stevenson. Not so much because of their accomplishments – Stevenson won three Olympic gold medals for Cuba and Rigondeaux had won two but was widely expected to be the first to win four. Both were as famous as someone can be on an island.

More important are the differences – these fighters on opposite ends of the weight spectrum were also on opposite sides of what can mildly be described as a very bad choice: Leave your family and country, or give up your chance at becoming a rich, world-famous athlete. Rigondeaux chafed under Castro’s restrictions and yearned for the world stage glinting just 90 miles to the north, so he packed himself into a smuggler’s speedboat and slipped across the Gulf of Mexico. Stevenson was offered a fortune to do the same but refused with the kind of retort the rest of us will only see in our most triumphant daydreams: “What is one million dollars compared to the love of eight million Cubans?”

Stevenson, who died in 2012, was considered by most to be the greatest amateur heavyweight of all time, and many believed he could’ve been “The Greatest” heavyweight, period. But of course the moniker had already been taken by Muhammad Ali. A matchup between the two men was the grail of boxing in the 1970s and many tried to lure Stevenson across the Straits to make it happen, but he turned down all offers. For this he became a fixture at Castro’s side and a hero of the Revolution.

What became of the internal man is more complicated. Butler’s book about Rigondeaux features Stevenson’s last interview, which was paid for with a little over a hundred dollars and a bottle of vodka (Stevenson insisted on it over rum). He made Butler chug a glass of it before the interview could even begin.

Some of that encounter is included in a short video Butler made, called “Ali vs Stevenson: The Greatest Fight That Never Was,” alongside sportswriter S.L. Price, promoter Don King, commentator Larry Merchant, trainer Freddie Roach and documentarian Leon Gast. It also features some remarkable footage of Ali “sparring” with Stevenson during a visit to Cuba in the late 90s.

The Stevenson interview is difficult to watch, for sure, especially with the juxtaposition of images showing what an incredibly charismatic man he was at his peak – much like his American counterpart, who suffered his own form of decay. But, like the Rigondeaux book, the video is a provocative study of consequences and a glimpse at what might have been.

Check it out by following this link.