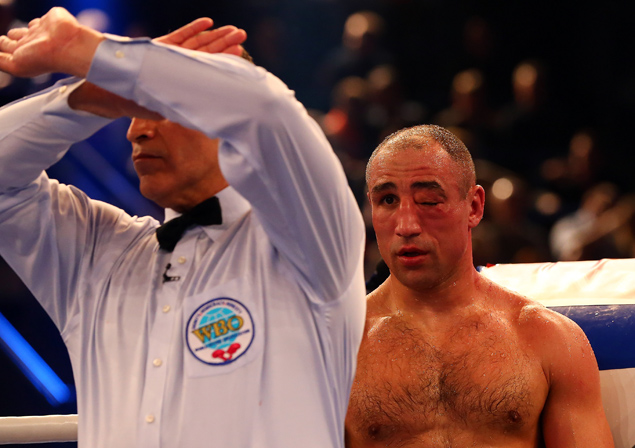 Robert Stieglitz came out like a man hell-bent on revenge and exacted just that on Saturday at the GETEC Arena in his hometown of Magdeburg, Germany, evening the score with Arthur Abraham to reclaim the WBO super middleweight title he lost to Abraham just seven months earlier.

“It was very important to win the belt back,” said Stieglitz. “I know I was the challenger, but it was very easy to get the title back. I knew I would win this; the hometown crowd helped. I knew I needed to set up my punches; my punches landed. I’m very proud to be champion again, especially in my hometown.”

Stieglitz (44-3, 25 knockouts) dominated the fight from start to finish; by the end of the third round, Abraham’s left eye was completely closed from an overhand right in the second. Referee Michael Ortega called over the ringside physician following the end of the round, who advised that Abraham was unfit to continue with the injured left eye and the fight was halted, much to the delight of the hometown crowd. 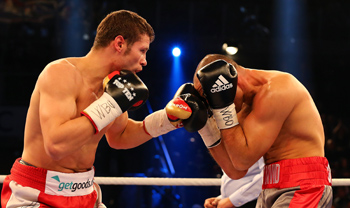 Stieglitz controlled the opening stanza against the slow-starting Abraham, pushing him to the ropes while looping shots around the gloves of Abraham’s trademark high guard.

Stieglitz, THE RING’s No. 6-rated super middleweight, seemed to make an adjustment this time around, concentrating more on the body attack to force his fellow German Abraham to lower his gloves.

Abraham (36-4, 28 KOs) stayed in his shell for the first half of the second round, then came on, unleashing with lunging hooks. Abraham, THE RING’s No. 5-rated super middleweight, was having success until he was caught with a booming overhand right in the corner that buckled him and forced him to hold on for dear life. Stieglitz went all-out trying to finish Abraham, but the titleholder made it out of the round, albeit with a badly swollen left eye.

Stieglitz, 31, focused his attack on Abraham’s damaged eye and continued to bully Abraham around the ring in Round 3. Abraham, 33, looked lost and was trying to survive. He resorted to rabbit punching and was sternly warned by Ortega. Moments later, Abraham clocked Stieglitz in the back of the head again and Ortega acted accordingly, deducting a point from Abraham.

Abraham never had a chance to get back into the fight when Ortega called the fight off at 3:00 of round three. According to punch stats, Stieglitz landed 70-of-203 punches (34 percent); Abraham connected on 27-of-107 (25 percent).

When Abraham and Stieglitz met in August of 2012, it was Abraham who had his hand raised with a unanimous decision victory. Both fighters won interim fights before signing on for the rematch of the action-packed first fight.

After tonight’ dominant performance, there may not be a need for a third encounter.

Epix televised the bout in the U.S.

Click here for the video highlights of Stieglitz-Abraham II