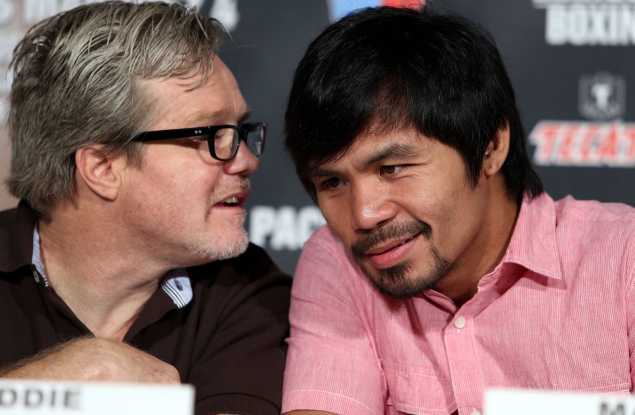 It was during an intense moment that Roach looked over at an agitated Pacquiao, who was to his left, and noticed that the eight-division titlewinner was digging his fingernail into the table.

“The one thing that Manny did at the press conference in LA that was different from any other time is, when I was sitting there with him, he scratched into the cloth on the table, ‘We need a knockout to win,'” said Roach.

“I mean, he spelled that out, and he’s never said that to me before a fight in his life. So I told him, ‘I’m going to hold you to that.'”

Marquez lost by a highly disputed majority decision in November to Pacquiao, with whom he has also battled to a draw and lost by split-decision previously.

“I’ve gone back and I’ve watched the first, second and third fights, and we’ve got to really, really get back to that perpetual motion that we had in the first fight,” said Roach.

“We can’t be so settled in front of this guy, because he’s a better puncher now, and I think that Manny needs to be that 24-year-old that he was when we first fought him, and that’s what we’re gunning for.”

Pacquiao has chosen to face Marquez over a return bout with Tim Bradley, whose controversial split decision in June dethroned Pacquiao as the WBO’s 147-pound titleholder and ended his 15-bout winning streak that included eight stoppages.

During early interviews with RingTV.com, Marquez’s trrainer, Nacho Beristain, said that that his fighter “will be better than ever.“

Marquez’s strength coach Angel Hernandez vowed that Marquez would be “bigger, stronger and faster,” and Marquez himself said that he will “try to knock out” Pacquiao.

“I picked Juan Manuel Marquez because it would be an exciting fight,” said Pacquiao during the Sept. 19 press conference at the Edison Ballroom in New York’s Time Square, which preceded the one two days later in Marquez’s hometown of Mexico City.

“If I chose Bradley it would be another one-sided fight. I don’t think the fans wanted to see me fight Bradly again. In the last fight, I took Marquez too lightly because I was the bigger man physically. My focus this time is to go for the knockout. I am a good counter puncher too, but that makes for a boring fight.”

Marquez, who turned 39 in August, was so angry following the last bout with Pacquiao that he nearly retired. Instead, however, he rebounded with April’s unanimous decision over Sergei Fedchenko for the WBO’s junior welterweight belt. 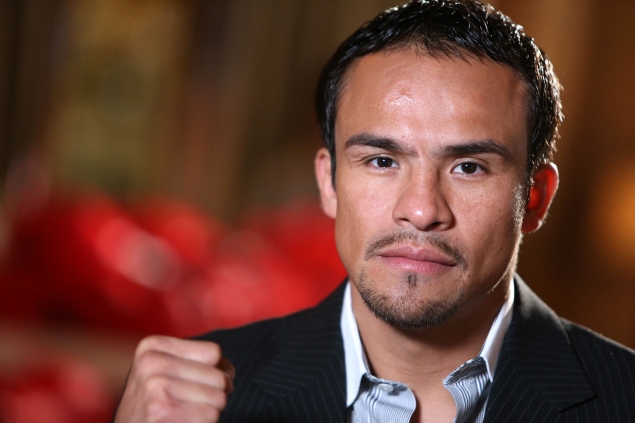 But Pacquiao, who turns 34 in December, is just as motivated to conquer Marquez.

“I want to erase the last fight and any doubts in number four. I will focus this time. I have to study and train using new techniques and strategy and apply techniques never used in my previous fights. I will fight and train like the old Manny; the 25-year-old Manny,” said Pacquiao in New York.

“I want to make the fight exciting. My concern is to make people happy that they watched or fight. I don’t want the fans to be bored. I need to be more aggressive in this fight. I want this fight to be different from the last one. I want a win that isn’t close like the last three. It has to be a decisive victory.”

Although he has been dropped to the canvas a number of times during his career, including in the second round of a one-sided, unanimous decision to Floyd Mayweather Jr. in September of 2009, Marquez never has been stopped.

Meanwhile, Pacquiao knows from experience what it is to return from being knocked out, having been stopped in the third round not once, but twice, earlier in his career in February of 1996 and September of 1999.

Pacquiao was 11-0 when he was knocked out by Rustico Torecampo, and, 26-1, before losing to Medgoen Singurat.

“After those fights, I’ll admit, I was thinking, ‘Oh, maybe I’m going to stop boxing,'” said Pacquiao during an interview three days prior to dethroning Miguel Cotto as WBO welterweight titleholder by 12th-round stoppage in November of 2009. “I was thinking, ‘Maybe boxing doesn’t like me.’ But then, it became a message to me to focus more on boxing.”

Asked if he thought Pacquiao could leave the Marquez fight up to the judges, Roach said, “no.”

Roach said he expects Pacquiao to arrive in America on Monday from his native Philippines and to begin training at his Wild Card Boxing Club in Hollywood, Calif.