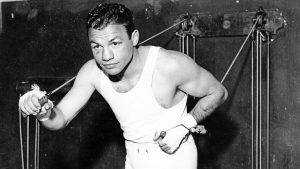 One of the best pound-for-pound fighters of the late 1920s and during the first half of 1930s, Canzoneri was a top-level threat from bantamweight to junior welterweight. The scrappy Louisiana native won world titles in three weight classes but he captured his first championship in the featherweight division by outpointing legendary Johnny Dundee over 15 rounds. Canzoneri battled many fellow future hall of farmers – including Bud Taylor, Billy Petrolle, Jackie “Kid” Berg, Kid Chocolate, Lou Ambers and Barney Ross – during his 14-year, 175-bout pro career.