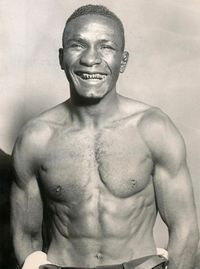 Flowers, the first African-American middleweight champion, lifted the title from the legendary Harry Greb in 1926. The ultra-aggressive southpaw, known as “The Georgia Deacon,” beat the fading Greb in a rematch before losing the title to Mickey Walker via controversial 10-round decision. Flowers remained a top middleweight and light heavyweight contender until his untimely death (the result of an operation to remove scar tissue from around his eyes) in November 1927.