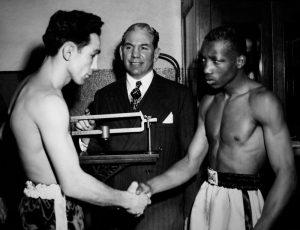 Sandy Saddler is considered one of the greatest featherweights of all time, in part due to his storied four-bout rivalry with Willie Pep. However, the Boston native was a prolific fighter apart from his three stoppage victories over Pep in world title bouts. Saddler, a tall and rangy swarmer with power in both hands, finished his career with 144 victories, 103 knockouts, with only 16 losses and two draws. He began his career with a torrid schedule that was busy even by 1940s standards. Saddler fought 22 times during his first year as a pro (1944), winning 19 bouts. In 1945, he was unbeaten in 24 bouts.