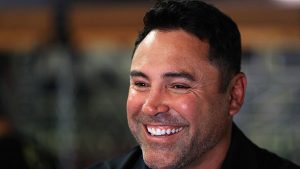 Oscar De La Hoya (born February 4, 1973) is an American boxing promoter and former professional boxer who competed from 1992 to 2008. His accolades include winning 11 world titles in six weight classes, including the lineal championship in three weight classes. He is ranked as the 29th best boxer of all time, pound for pound, by BoxRec. De La Hoya was nicknamed “The Golden Boy of boxing” by the media when he represented the United States at the 1992 Summer Olympics where, shortly after having graduated from James A. Garfield High School, he won a gold medal in the lightweight division, and reportedly “set a sport back on its feet.”