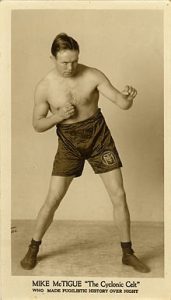 Born in Ireland, McTigue made his name in New York City as a prize fighter. While not as skilled or talented as contemporaries – such as Harry Greb, Mickey Walker, Tommy Loughran and Young Stribling, who beat him via newspaper decisions – but he was every bit as popular. McTigue won the light heavyweight title from Battling Siki via 20-round decision in Ireland in 1923 and held it until 1925.