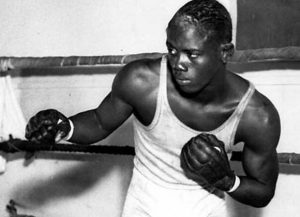 After a reportedly undefeated amateur career in Cuba, this wildly popular boxer made his name in New York City during the late 1920s and early 1930s by taking on the top contenders and titleholders from bantamweight to junior welterweight – including fellow future hall of farmers Fidel LaBarba, Jackie “Kid” Berg and Tony Canzoneri. Kid Chocolate (born Eligio Sardinias-Montalbo) won his first world title by stopping future hall of famer Benny Bass in seven rounds in 1931. He would later win the featherweight crown in 1932.