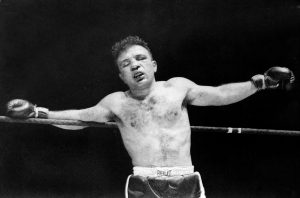 Giacobbe “Jake” LaMotta (July 10, 1922 – September 19, 2017) was an American professional boxer, world middleweight champion, and stand-up comedian. Nicknamed “The Bronx Bull” or “Raging Bull”, LaMotta was a rough fighter who was not a particularly big puncher, but he would subject his opponents to vicious beatings in the ring. With use of constant stalking, brawling and inside fighting, he developed the reputation for being a “bully”; he was what is often referred to today as a swarmer and a slugger.