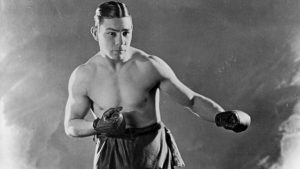 Greb faced and beat the best middleweights, light heavyweights and heavyweights of the late 1910s and the early 1920s, including future heavyweight champ Gene Tunney, before he settled in at middleweight where he held the world title from 1923 to 1926. Greb, known as “The Pittsburgh Windmill” because of his frenetic, volume-punching style, was awarded the Ring title in 1924. He defended it against fellow all-time great Mickey Walker in 1925, but died tragically (after losing the title to Tiger Flower) while undergoing surgery to repair facial injuries in 1926.