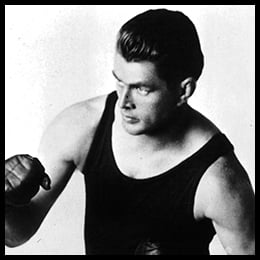 Handsome, erudite, supremely skilled but also tough-as-nails, Tunney was a respected but underrated boxer who upset an icon and retired as heavyweight champ. “The Fighting Marine” had star potential but was overshadowed by his rival, Jack Dempsey, who was a transcendent sports figure of the 1920s. Tunney is best known for his back-to-back victories over Dempsey and the infamous long count of their revenue record-shattering rematch, but he faced – and defeated – several other standouts of his era during his years as America’s top light heavyweight, including Battling Levinsky, Georges Carpentier, Tommy Gibbons and the great Harry Greb. In 68 pro bouts, Tunney’s only loss was a bloody 15-round decision to Greb, which he avenged in two competitive return bouts (they also fought two 10-round “newspaper decision” bouts). He received Ring Magazine’s inaugural Fighter of the Year award in 1928.