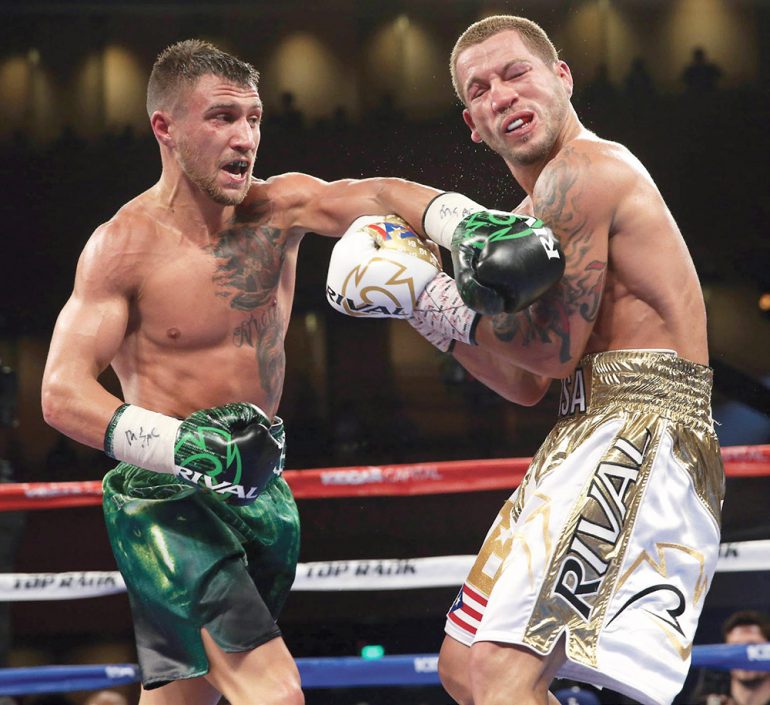 Vasyl Lomachenko (pictured above, on the left) looks like he’s on another level. He’s the brightest star, but the sky at 130 also is home to plenty of fireworks. Recent years have brought war after war, and this year has already included Francisco Vargas vs. Miguel Berchelt and Takashi Miura vs. Miguel Roman. We’ve also had the recent rise of Gervonta Davis. Those in this international division mostly fight in the United States. And soon we will say the same for Jezreel Corrales, a Panamanian who went to Japan to upset the then-top 130-pounder, Takashi Uchiyama.

Lomachenko knocked out Roman Martinez to win a title last year, made Nicholas Walters quit in November and pummeled Jason Sosa in April. Lomachenko moved to 130 in search of competition but might not stick around despite what’s available. There is talk of a rematch with Salido, who edged him thanks in part to fouls and a weight advantage. Otherwise, Lomachenko is eyeing titleholders at 135. Berchelt stopped Vargas for a title in January and had Miura schedueld for July 15. Miura completed his recovery from the loss to Vargas with his KO of Roman on the Berchelt-Vargas undercard.

Corrales showed his second-round upset of Uchiyama wasn’t a fluke, winning a split decision in their rematch. He’ll be in California to defend against Robinson Castellanos on the Berchelt-Miura show. Davis stopped Jose Pedraza for a title in January, then went to the U.K. to make short work of Liam Walsh in May. His promoter, Floyd Mayweather Jr., wisely doesn’t want to rush the 22-year-old toward Lomachenko. Davis had trouble making weight against Walsh and might soon outgrow the division.

Read our feature story on Lomachenko in the August 2017 issue of THE RING.

Salido had nearly a year off, then came off the canvas to stop late replacement Aristides Perez in May. Salido’s career has been long despite the many wars, while Vargas’ may be shortened because of them. The latter is taking time off. Uchiyama hasn’t returned since the second loss to Corrales. Walters has bottomed out between self-imposed inactivity and giving up against Lomachenko. He has the tools, but the mental aspect may be an issue. Sosa is gritty and belongs in there with the other warriors. Castellanos fell short twice at featherweight but may have just ended Yuriorkis Gamboa’s career. Jesus Cuellar is moving into the division after losing to Abner Mares at 126. Edner Cherry shouldn’t be discounted; many feel he was ripped off against Pedraza in 2015.

IS HE STILL AROUND?
Billy Dib

MOST FUN TO WATCH
Takashi Miura

ON THE WAY UP
Tevin Farmer

ON THE WAY DOWN
Takashi Uchiyama 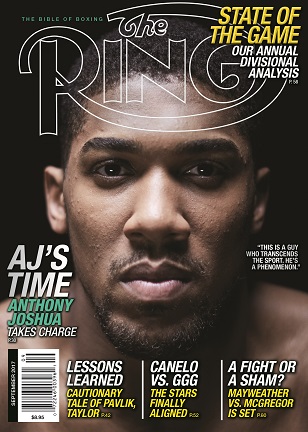 Anthony Joshua proved his starpower and more against Wladimir Klitschko

The much-maligned British heavyweights have had the last laugh

It’s All in the Timing

State of the Game

Evander Holyfield's lawyer had his own (extremely short) career in combat

Just when you thought the crime report couldn't be crimier

Recent moves and the current state of THE RING's divisional rankings

Daniel 'Dynamite' Dubois could be a heavyweight star in the making

Layla McCarter is leading the push for three-minute rounds

A look back at some significant fights from the past month

One moment from a divisive night in heavyweight history

Get connected to the boxing world