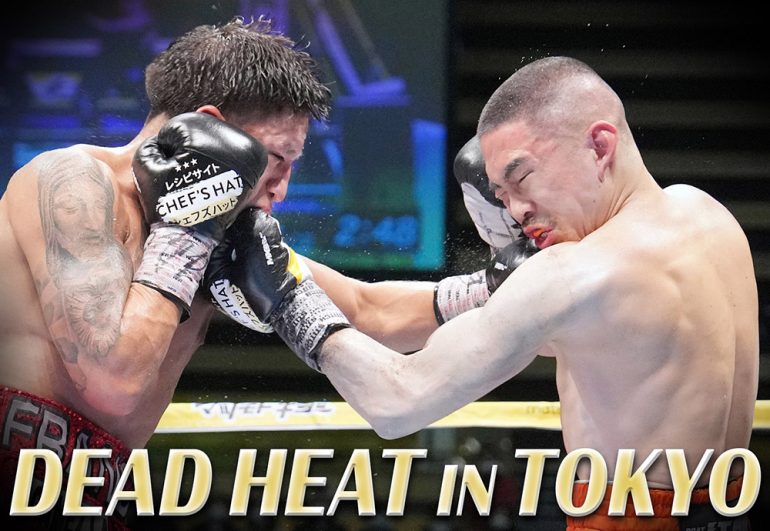 THE CROSSROADS SHOWDOWN BETWEEN VETERAN KAZUTO IOKA AND UP-AND-COMER JOSHUA FRANCO GAVE FANS ALL THEY WANTED EXCEPT FOR ONE THING: A WINNER

Local hero and WBO 115-pound titleholder Kazuto Ioka made an appearance in the ring on the last day of the year – a tradition he has maintained for five years in a row and 11 times overall – when he sought to unify his strap with highly regarded WBA counterpart Joshua Franco at the Ota-City General Gymnasium in Tokyo. 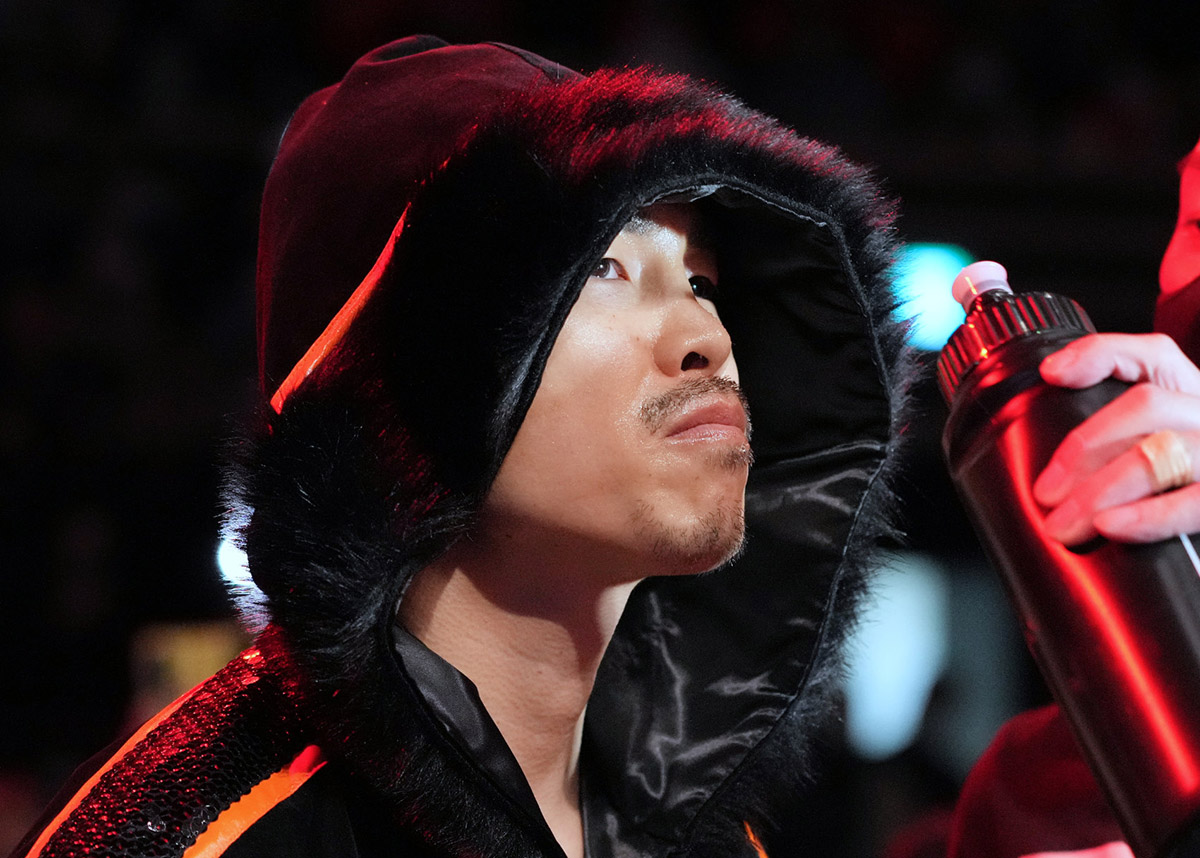 On paper it looked like a can’t-miss matchup – and it didn’t disappoint.

There was no feeling-out round as both boxers looked to establish their jabs early; Franco pressed forward with his volume punching while Ioka picked him off with combinations. Franco was able to sneak through some right hands, but Ioka was defensively sound, catching many shots on the arms and gloves.

Ioka landed a pair of right uppercuts early in the second frame but was caught with a left hook in return. Ioka unveiled the left hook to the body in this round, a punch he would use extensively through the rest of the fight. Franco had some success with his combination punching, even if some of the shots didn’t get through. Ioka nailed Franco with a big right hand late in the round but was on the receiving end of a flurry of punches just before the bell.

The pattern of the fight was already emerging: Franco with his high output versus Ioka with his pinpoint accuracy.

Ioka had a strong round in the third, using his control of distance to make Franco’s long shots fall short and then attacking on the counter. Later in the round, Ioka showed his diversity, taking the fight inside and getting the better of the exchanges. 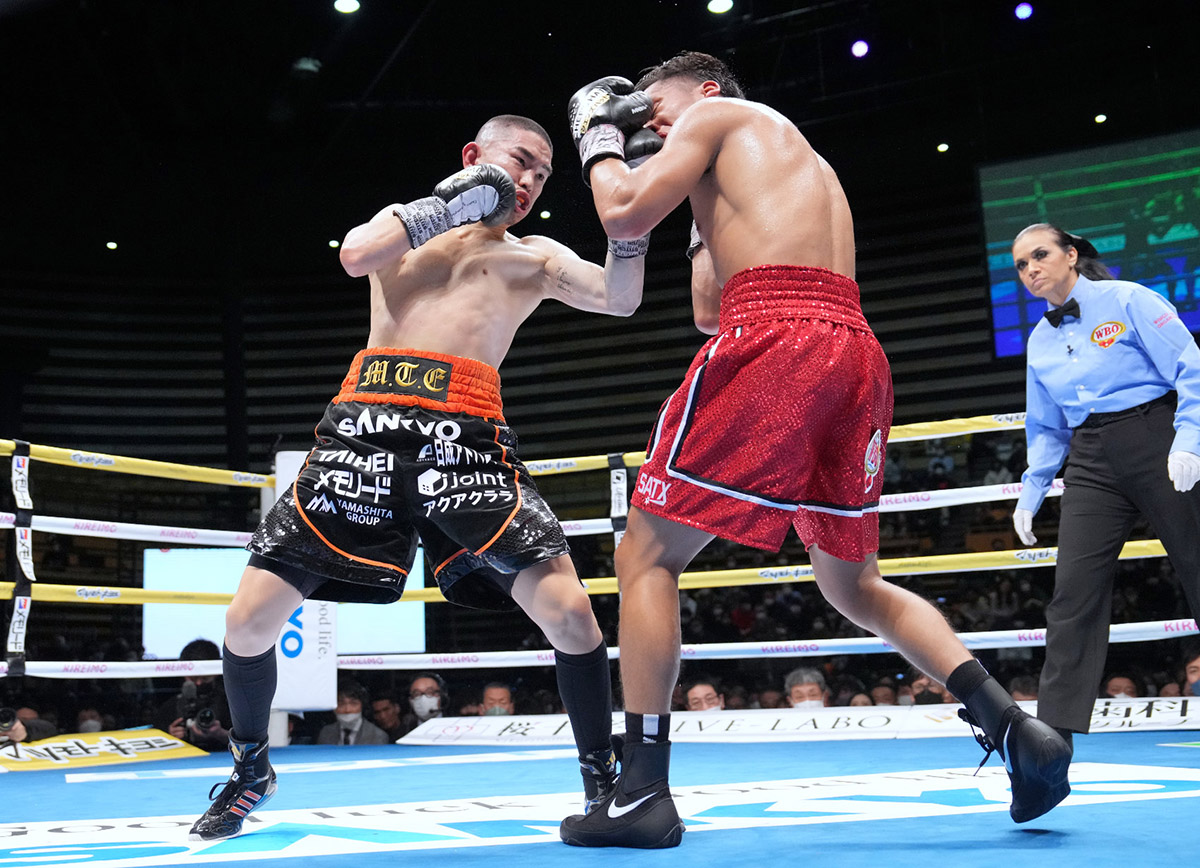 The right-left rip combination was particularly effective for Ioka in the fourth, but despite the clean shots, Franco kept wading forward and letting his hands go.

The jab-fest continued through the middle rounds, punctuated by some violent exchanges and brilliant inside fighting from both boxers. With the amount of powerful left hooks Ioka landed to the body, one can only presume Franco has no liver. Any normal human would need an organ transplant after that amount of punishment.

By the eighth round, it was difficult to split the fighters. As soon as one of the combatants appeared to have the ascendency, the momentum would shift back the other way. 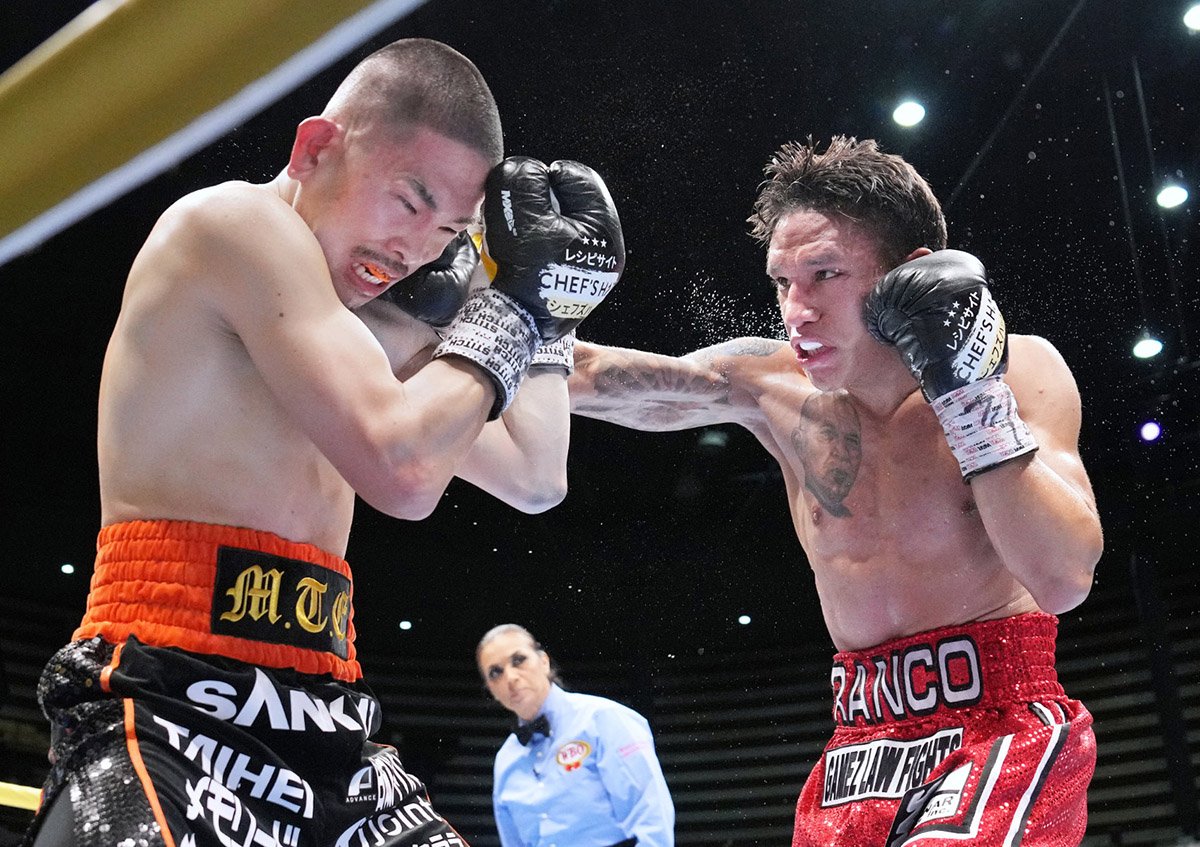 The action showed no signs abating in the ninth and tenth stanzas as they continued to exchange leather at a furious pace from mid- and close range.

The fireworks continued into the championship rounds, with both boxers appearing to realize the result of the bout hung in the balance. Ioka went back to his proven tactic of working from range and walking Franco onto his shots, but just like the Terminator, Franco continued to come forward with bad intentions, landing a volley of shots in the final 10 seconds to possibly steal the final round.

Franco, who had been on the sidelines for 16 months, showed a huge tank to finish the fight strongly with his free-flowing punch output. But Ioka wasn’t going to surrender his belt easily and eventually abandoned his sharpshooting to fight toe-to-toe with Franco until the final bell.

It was one of those fights where you would hate to be a judge.

South African official Stanley Christodoulou scored the bout for Franco 115-113, while New Zealand’s Ferlin Marsh and Puerto Rico’s Jose Roberto Torres both turned in identical scorecards of 114-114. The judges could only agree on the outcome of six of the 12 rounds contested. 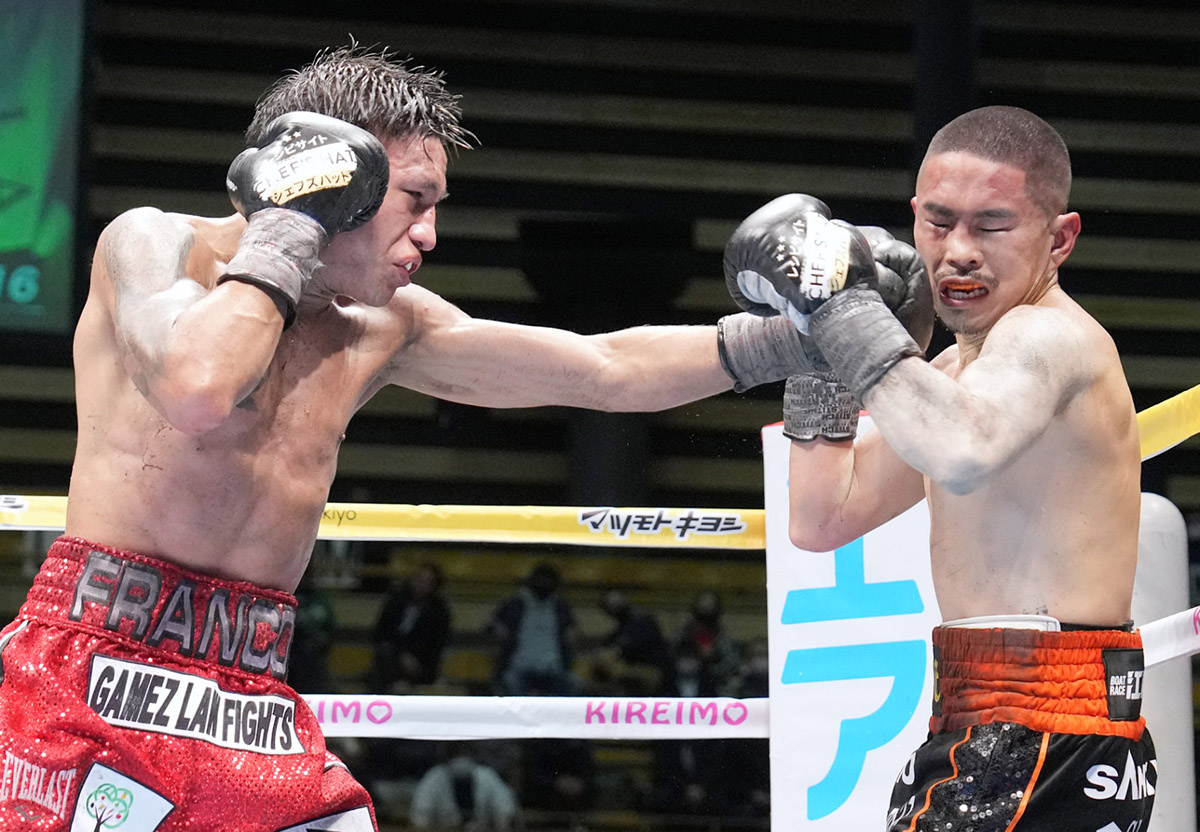 Ioka was clearly disappointed with the result, the only blemish on his ledger on a New Year’s Eve fight in Japan.

“I would like to apologize for being unable to live up to your expectations,” Ioka said to the crowd. “I thought I had an advantage midway through the contest. His technique and mental strength kept me from showing a clear difference.”

According to CompuBox, Franco surpassed 100 punches per round from Rounds 3 to 12, with his highest number being an astonishing 140 blows in the final frame. He almost doubled Ioka in total punch output, with 1,412 blows thrown compared to 797 for Ioka, but the local fighter proved to be more accurate, with a 26.9 percent connect rate to the visitor’s 14.3 percent.

The real story of the statistics, though, was the number of punches landed. Ioka had the slightest of advantages, with 214 to Franco’s 202. The fight was that close.

After the inconclusive result of Ioka-Franco, the race is now on to see who lands the plum gig of facing the 32-year-old Estrada for The Ring’s championship belt. 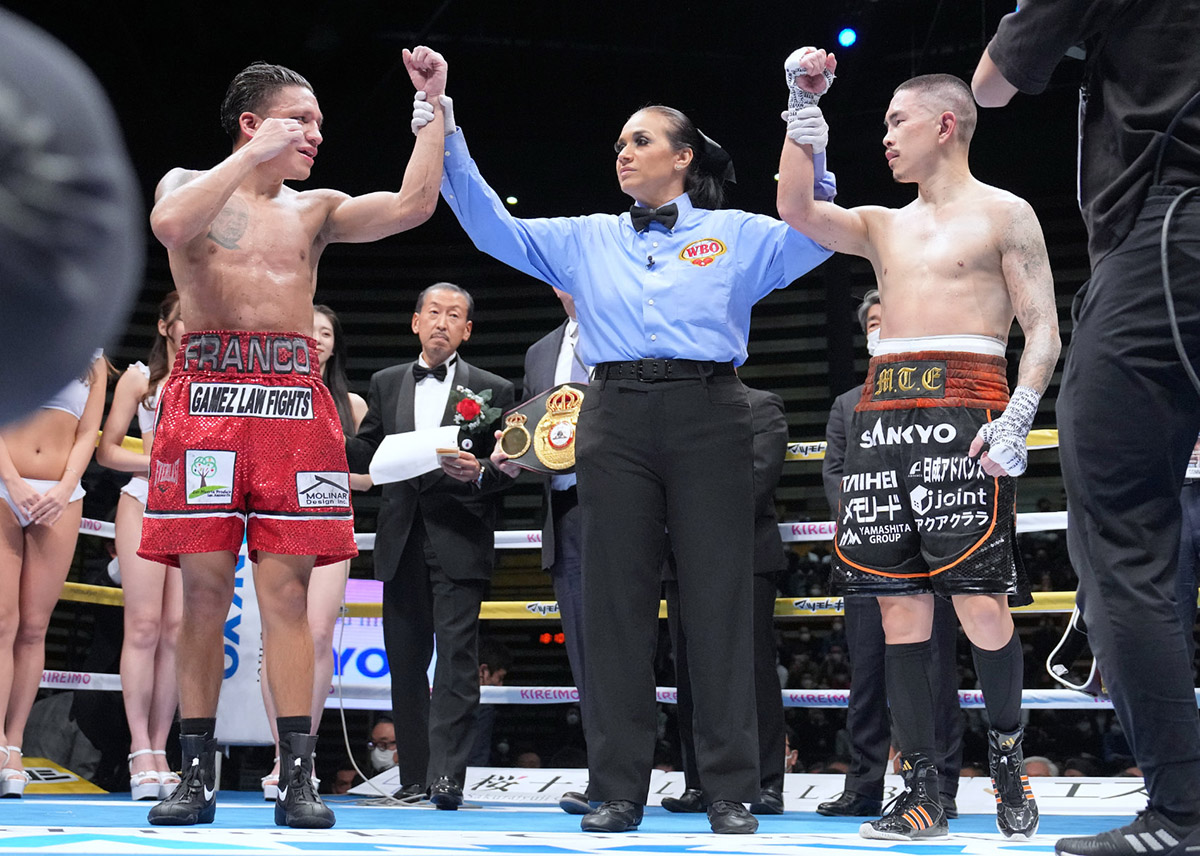 It looks more like that’s going Franco’s way at this stage, as the WBO wasted little time in ordering a 30-day free negotiation period for a bout between Ioka and Junto Nakatani (24-0, 18 KOs) or face the prospect of going to a purse bid. The deadline for the bout to take place is the end of June.

But during a press conference at his gym after the Franco fight, Ioka said he had a number of options going forward, including  a rematch with Franco or the throwdown with Nakatani. But his main priority is to secure the bout with Mexico’s Estrada.

That won’t be easy, though. Franco’s manager, Rick Mirigian, firmly believes his fighter was robbed on the road, and from his position, a bout between Estrada and Franco is a must. To this end, he even posted a mock-up fight poster for an Estrada vs. Franco bout on his social media accounts in an effort to pressure promoter Eddie Hearn and streaming service DAZN to make the fight.

Whichever way the cards eventually fall, we are all but guaranteed more rounds of beautiful brutality.