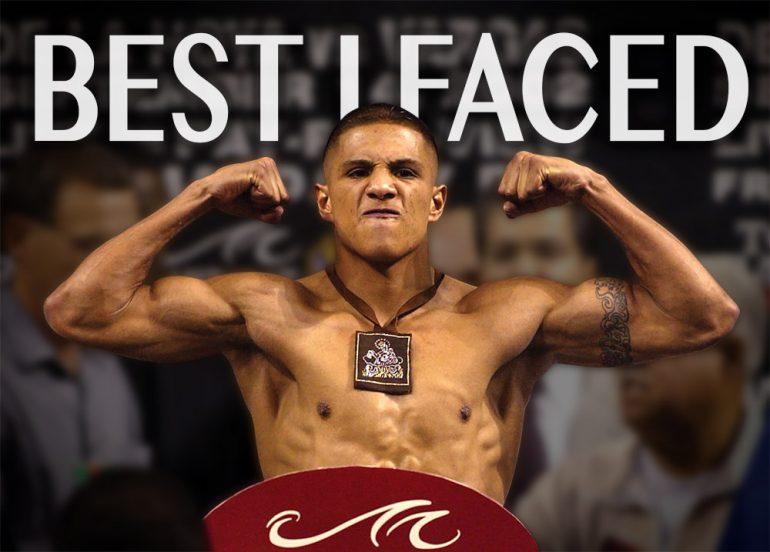 Fernando Vargas was a shooting star who rose to prominence at a young age, becoming the youngest junior middleweight titleholder in history. And he burned out just as quickly.

Vargas was born and raised in a working class home in Oxnard, California. He began boxing when he was 12 and rapidly became a sensation.

“I was the youngest in history to win a national tournament in an open division,” Vargas told THE RING. “I was 16 years of age. My record can never be broken, because kids my age were getting knocked out, so they changed it to 17. I became number one (amateur ranked in the U.S.) at 132 (pounds), at 139, 147 – every time I moved up, I became number one.”

At just 18 he qualified for the 1996 Olympics, then controversially lost in the second round and decided to make the leap to the pros. His services were heavily courted before he signed with Main Events and began his journey in March 1997.

“El Feroz” (“The Ferocious One”) rattled off 14 consecutive wins, all by KO in six rounds or less, to earn a shot at the vastly more experienced Yori Boy Campas, a veteran with a 72-2 record at the time, for the IBF junior middleweight title. Vargas boxed terrifically in what he says was his best win and proudest moment, forcing the heavy-handed Mexican to surrender after the seventh round.

Those wins set Vargas up for one of the biggest boxing events of 2000, his showdown with former welterweight champ and fellow unbeaten 154-pound titleholder Felix Trinidad. Vargas had to get off the canvas twice in a tumultuous opening round. He dropped the Puerto Rican hero in the fourth but was ultimately stopped in the final round of a barnburner.

Vargas rebounded with two wins, claiming the WBA strap. All the while he craved a match with Oscar De La Hoya to settle an old grudge.

“I looked up to Oscar as a kid,” said Vargas. “I went to go spar with Oscar in Big Bear and I was running with Robert Garcia. I didn’t know the path, and I fell. Robert was in front of me and he didn’t know that I fell; he had on earphones. Oscar ran by me and laughed and kept running. From that day I said, ‘One day I’m going to beat this motherfucker.’”

The bout took place in September 2002, and Vargas channeled his animosity into bullying De La Hoya early. As the fight wore on, however, De La Hoya’s punches took their toll and he was able to stop Vargas in the 11th round.

Afterward, Vargas was found to have a banned substance in his system (the steroid stanozolol) and served a nine-month suspension.

He returned and reeled off four wins before looking like a shadow of his former self in losing twice against Shane Mosley and then to Ricardo Mayorga. He retired in 2007 with a record of 26-5 (22 knockouts).

Vargas, now 40, lives in Las Vegas and is married with four children. He is still involved in boxing, training two of his sons – both of whom are promising amateurs (“The legacy lives on,” said Vargas) as well as several pros. He has established the Fernando Vargas Fighting Foundation for inner-city kids. Also, he and De La Hoya have since sorted out their differences and are now friends.

Vargas graciously took time to speak to THE RING about the best he fought in 10 key categories.

IKE QUARTEY: He had a strong jab; he was a great jabber. He was known for his jab and I definitely know why. It was solid when it would land. What you’ve got to do with someone who has a great jab is out-jab him, and I was able to out-jab him and win the fight.

OSCAR DE LA HOYA: I put a lot of pressure on him, but he definitely had the best defense. He had great head movement. The jab was definitely key for him, his ring I.Q. … he was a great fighter all around.

QUARTEY: Mosley was fast, but it wasn’t out of this world. Ike Quartey was fast. His jab was fast and his punches were fast.

DE LA HOYA: I was trying to cut the ring, but it was difficult to catch him. When I got him on the ropes I’d try to keep him there, and then he’d get out. He had great ring generalship and boxing ability.

DE LA HOYA: I’m going to have to go with Oscar again. He was very intelligent. If you didn’t move your head after every combination, he was going to get you. If you left yourself open for something, he was going to catch you. He knew how to use the ring.

FELIX TRINIDAD: I never felt anything like that in my life. I think the wraps helped him. I know that after his fight with (Bernard) Hopkins, they found his hand weren’t wrapped correctly. That made my career shorter. I was trying to keep him off me and I couldn’t; it was constant pressure. I was trying to box and punch, too, but he was the strongest.

TRINIDAD: Him, but now I know why! I didn’t even know I got knocked out. I was never down in the amateurs or pros, and I went down five times and I don’t remember half the fight. But I know I fought with all my heart.

When I was on the way to the hospital in the ambulance with my wife after the fight, I said, “Baby, did it look bad when I went down?” And she said, “You got up every single time.” And I said, “How many times did I go down?” I didn’t know I went down five times and I got up five times. That’s the warrior that went in. It’s in your DNA. I don’t remember getting up, but I know if I have a heartbeat in my body I’m going to get up. Regardless if I’m in a fight or in life, it doesn’t matter. I’m not going to lay down.

I felt like I was getting hit by a bat. It was like an explosion in my head. I couldn’t believe it. You can see by my expression in the first knockdown. I know I’d have lasted longer in the game if I didn’t take that fight. It’s a risk – I take the good with the bad.

DE LA HOYA: Oscar had the best boxing skills. He could do everything. He could box, he could punch, he could go forward and he knew what he was doing.

Lighten up, it's just fantasy

Sugar Ray vs. Money May

Dream Fights: By the Numbers

Fantasy meets science in the ring

By the Numbers: Tyson vs. Frazier

The explosive combination of Iron and Smoke

By the Numbers: Leonard vs. Mayweather

A battle of welterweight wizards

Call it a Comeback

The big man has returned

Nico Hernandez aims to put Kansas on the map

An Olympian forges her own path in the pros

A Monster among us

The legacy of Pac-Man

The difference a minute makes

The toughest foes of

The latest shifts in our Top 10 lists

We've been at this game for ages...