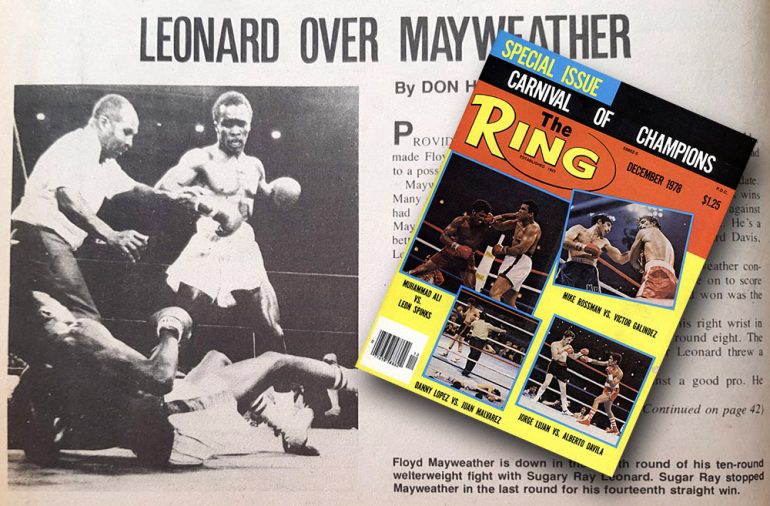 The following article appeared in the December 1978 issue of THE RING and is presented here in its original form (aside from notes in parentheses).

Mayweather, on paper, was to be Ray’s toughest contest to date. Many critics had said that most of Leonard’s thirteen previous wins had been against nobodys. That may be so, but against Mayweather he looked like a fellow who may have talent. He’s a better class of boxer than fellow Olympic winners Howard Davis, Leo Randolph, and Michael Spinks.

The fight itself was Ray’s all the way. He let Mayweather control the first two minutes of each round and then came on to score heavily in the last minute. The only frame that Floyd won was the first.

After the bout, Mayweather stated that he hurt his right wrist in the first round. Floyd was on the deck twice in round eight. The referee halted the contest in the last round (Round 10) after Leonard threw a flurry.

Trainer Angelo Dundee: “Ray fought against a good pro. He went to school today. He had to club fight this guy, take charge of him and run the fight.”

Mayweather on Leonard: “He’s a fairly decent puncher, but he’s no kayo artist. A surprise shot of his might take you out and he might get you with a flurry, but he can’t really punish you if you see it coming. You got to have a punch in this game. If you ain’t got a punch, you can’t keep people off you. As Leonard moves up the ladder trying to get that title, he’s gonna meet a lot of people like that.”

Ray’s remarks after the bout: “I sure nailed him with a lot of right hands to the same spot on the side of the head. As a human, I kinda felt like the fight should have been stopped in the sixth. A guy shouldn’t have to stay in there and just get banged around.”

There are two things we found out. First, Leonard is a target for a good left jab. Second, most welters in the top ten will be outboxed by him – most of them can’t bang.

Ray’s next outing is against Randy Shields in Baltimore. Shields was murdered by Wilfred Benitez last time out. The only obstacle in Ray’s way in the welterweight division is WBC champion Jose (Pipino) Cuevas. Jose is just too much of a puncher for Ray at this time. (Carlos) Palomino would be a tough bout, but Leonard would have an even chance against the world welter king.

Lighten up, it's just fantasy

Sugar Ray vs. Money May

Dream Fights: By the Numbers

Fantasy meets science in the ring

By the Numbers: Tyson vs. Frazier

The explosive combination of Iron and Smoke

By the Numbers: Leonard vs. Mayweather

A battle of welterweight wizards

Call it a Comeback

The big man has returned

Nico Hernandez aims to put Kansas on the map

An Olympian forges her own path in the pros

A Monster among us

The legacy of Pac-Man

The difference a minute makes

The toughest foes of

The latest shifts in our Top 10 lists

We've been at this game for ages...