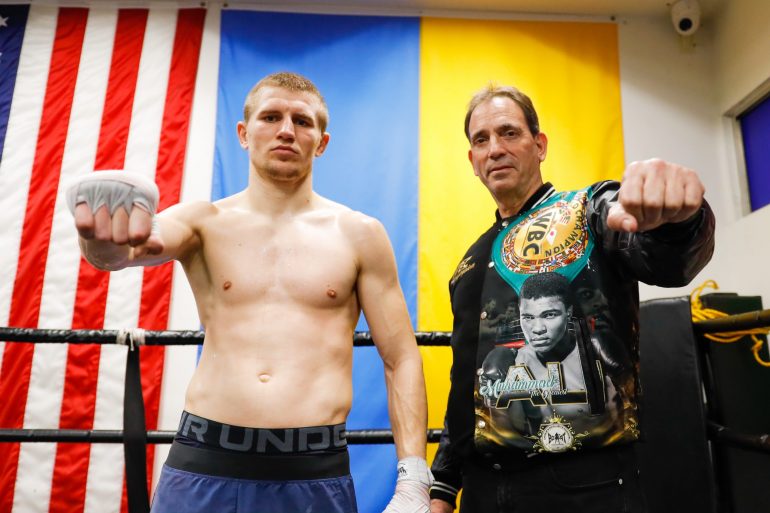 When Serhii Bohachuk steps into the ring with big-punching Nathaniel Gallimore at the Quiet Cannon Country Club in Montebello on Friday, it won’t be the first time he’ll have been under heavy fire in recent times. 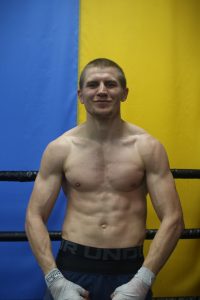 Serhii Bohachuk spent most of 2022 in his embattled home country of Ukraine. Photo by Josephine Fischer

The proud Ukrainian battled for his country in the on-going conflict with Russia, so he won’t be unduly concerned with what Gallimore, arguably the toughest opponent of his pro career, throws at him.

“I’m ready for this fight, my country is in a war, this is very bad,” Bohachuk (21-1, 21 KOs) told The Ring. “I was in the war for a couple of months. I did many things to help Ukrainian people. My family is in Ukraine.

The 27-year-old boxer-puncher knows that his and Gallimore’s aggressive styles could make for a fan-friendly shootout but he intends to not fall into the trap that he did against Brandon Adams, who scored a come-from-behind stoppage in March 2021, Bohachuk’s only loss to date.

“One time I showed stupid boxing and I lost. I’m fighting his style and lose. You need to be smart. For me, what is important is victory, KO or decision – I want to win.” 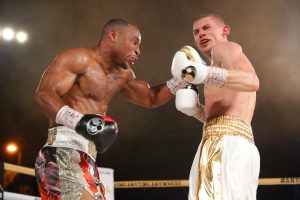 Bohachuk suffered the only loss of his pro career vs. battle-tested Brandon Adams in 2021. Photo by Tom Hogan

Bohachuk, who was the subject of a New Faces feature in the July 2019 issue of The Ring, impressively snapped a 14-month hiatus from boxing by bludgeoning usually durable Aaron Coley into defeat in two rounds last November.

“I didn’t fight because I was in Ukraine waiting for my visa and the war started,” he explained. “This was a good fight for me. Coley is a good opponent. I was ready for that fight because he was strong, he hadn’t been stopped before me. He had a good punch, he was strong. I finished him in two-rounds. I don’t know why; it was easy but he was strong but I was stronger.”

The power-puncher hopes victory leads to something even more significant later this year.

“I want to win fight, doesn’t matter who has a title, let’s go,” he said. “I need a title. I need the best opponent, who had titles, who had four belts, let’s go. I want to be absolute champion.”

Bohachuk is promoted by Tom Loeffler of 360 Promotions, who welcomes the opportunity to give his fighter much-needed exposure in what appears a very intriguing encounter.

“We are excited to bring Serhii back to defend his WBC [Continental Americas] title headlining UFC Fight Pass against a dangerous opponent like Nathaniel Gallimore,” said Loeffler, noted for his work with Gennadiy Golovkin. “Gallimore has fought world-class opposition like Sebastian Fundora and Julian Williams.

“Serhii has gone through a lot while he was in Ukraine for six months while his country was invaded. With that motivation, he is now even more proud to represent and fight for his country in the boxing ring.” 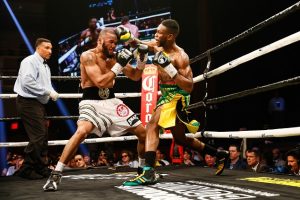 However, his form dropped off and he has lost to the likes of future unified champion Julian Williams (MD 12), and Ring-rated contenders Erickson Lubin (UD 10) and Sebastian Fundora (KO 6). The 34-year-old enters this contest with a record of (22-6-1, 17 KOs).