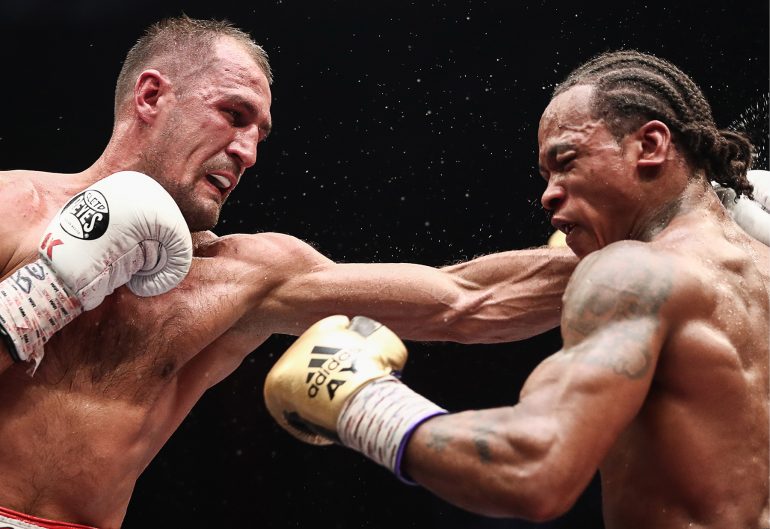 Ajayi says the Kovalev experience was invaluable for both him and Yarde. Photo by Valery Sharifulin-TASS via Getty-Images
23
Jan
by Tris Dixon

Outspoken trainer Tunde Ajayi declared he has not been his usual self ahead of the huge light-heavyweight showdown that sees his charge, Anthony Yarde, take on unified champion Artur Beterbiev.

Before Yarde fought Sergey Kovalev in Russia back in 2019, Ajayi was loud, brash and hugely confident in the media, talking up Yarde’s chances.

In doing so, he arguably put pressure on himself and on his boxer, even though it was an act to try and take it off Yarde.

“First thing is, you’ve not heard from me as much as you did in the run up to Russia, so that is key,” he said, when asked what is different between this build up and the run up to Kovalev. “Ant was praising me today because he said I’m just different, my energy is just different and it’s something that he’s feeding off and it’s brilliant. In the past, I felt I needed to talk, I needed to be heard, that Anthony wasn’t being given the respect that he deserved and I was really the mouthpiece for that. Looking back, I see how cool calm collected Buddy McGirt was [training Kovalev], he wasn’t even at the [press conference] table, he was in the crowd. And I remember looking at him thinking, ‘You’re supposed to be up here, you’re supposed to be up here defending or talking up your guy and everything like that.’ But, again, it’s experience.”

Ajayi is a former pro who was in some ways humbled by Yarde’s loss in Russia. The Londoner gave it everything, but after a good spell late in the fight he ran out of gas and was stopped. Beforehand, Yarde had been criticised for the level of opposition he had faced, but Kovalev was too much of a quantum leap at the time. Still, Ajayi admits the experiences have been invaluable for the pair.

“Going over to Russia, a new environment, they would only pay for what was really only four days…” Tunde explained. “No acclimatising, not being given hot water, you can’t talk about these things and it resonate, you have to experience it. The weigh in… not giving us the right water after to rehydrate… so many things happened to us that if they didn’t happen to us, I don’t think we’d be here today.”

Ajayi now seems to be talking with a sense of destiny in his voice, of expectation rather than hope.

“I’ve kept a low profile for this, in terms of my own personal speaking [to the media] and I think Ant has, too, it’s been excellent,” Tunde continued. “The whole camp has been excellent. There’s a few weeks left and he’s unified light-heavyweight champion of the world.”

In the aftermath of the Kovalev fight, Ajay was forced to admit that he did not know it all. Instead of being too stubborn for his own good, and for Yarde’s, changes were made and they introduced former European super-middleweight champion James Cook into the coaching team. Cook was a good fighter and he’s been around the sport for five decades as a boxer and then as a coach.

“James Cook has been a revelation,” Tunde admitted. “James Cook can say he’s 2-0 [in Team Yarde], and they’ve been two blistering performances. One went four rounds and one went three rounds. I just think Anthony is in a special place at the moment that fighters seldom reach. He’s a very calm individual but you know how strong someone is… dealing with the first loss in Russia, coming through the pandemic, losing all those family members [Yarde lost several members to Covid, including his father], coming back from a loss [to Lyndon Arthur], winning in devastating fashion and then lifted a man off his feet with an uppercut, he’s in a great place and the training has been excellent as well.”

And with the addition of Cook into the mix, Ajayi said the team was stronger, that lessons had been learned and approaches and tactics have been changed in camp, in fights and in mindset.

“Experience is something that we never had going in,” Ajayi continued. “Wisdom is something that we never had going in. I’ve got people with no boxing heritage and brought them not once but twice to the top of the mountain but we were still lacking experience and that wisdom, someone who is close to us who could say, ‘I know you guys train hard but you just need to reign it in a little bit; relax. Calm down. Do this press conference, don’t go back to the gym and train. The press conference and all the media is a training session in itself.’

“James said that to us, and me and Ant were like, ‘Are you crazy?’ ‘Bruv, we’re going to the gym.’ That was always our thing. We’re working. We come from nothing, but we’ve been given an opportunity, so every passing second, minute or hour, we’re using it. And for the first time, we had someone say. ‘No, go back, relax, you’ve done enough. Chill.’ Wisdom, knowledge and experience. Something you can’t buy. Something you can’t pay for.”

Beterbiev win would open door to the Box Office