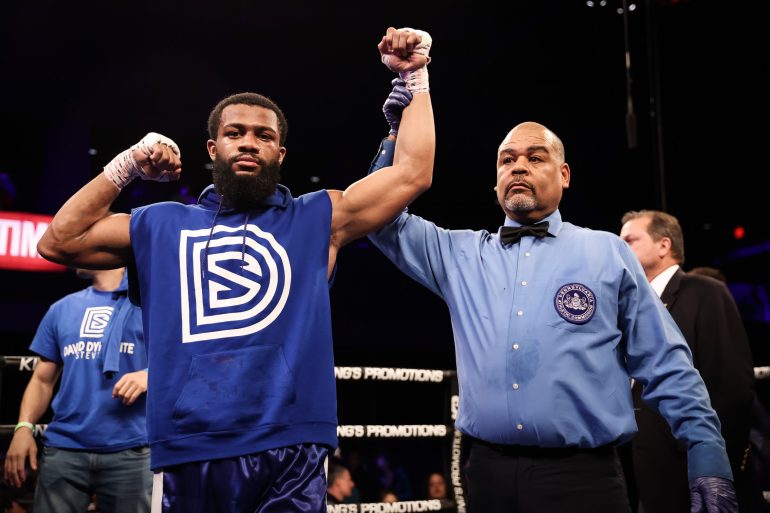 It took Stevens a few more rounds, but the super middleweight eventually caught up with Hemphill and closed in exciting fashion, stopping the previously undefeated Hemphill in eight.

“I felt like it was a good performance in front of my hometown crowd,” Stevens said. “I didn’t know how the judges had it scored and I knew I wasn’t executing like I should have been and I had to pick it up like my corner was telling me. Near the end I just had to stay relaxed.

“I know I didn’t have a great performance, so I don’t think it shows the 168-pound division much. I need a way better performance to start getting people’s attention and open doors and letting people know who I am.

“I think I could have done a better. Just improved on a little bit of everything. We were both breathing pretty heavy near the end there and I knew I just needed to keep pushing.”

Stevens (12-0, 9 knockouts) was the stalker, commanding the center of the ring, while Hemphill circled and tried pecking at Stevens with his back against the ropes. Stevens’ objective was to make Hemphill uncomfortable with pressure.

At the start of fourth, Stevens flew across the ring and immediately engaged Hemphill. The pressure-fighter from Reading was beginning to separate himself from Hemphill.

Through four, both fighters landed 31 total punches each.

In the first 20 seconds of the sixth, Stevens bounced a combination off of Hemphill’s head.

With 2:00 left in the fight, Stevens chopped at Hemphill’s body, then came up top to bang a left hook off his head. Three seconds later, he bounced Hemphill’s head back with a right uppercut. 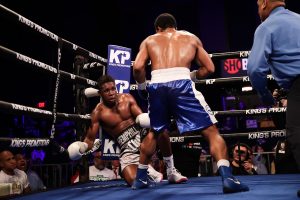 David Stevens stopped Sean Hemphill with two seconds left in the eighth of a competitive fight (Photo by Amanda Westcott).

Then, with both fighters too tired to stand, it seemed, Stevens unfurled a left hook with :32 left, followed by a right and with :28 left in the final round, Hemphill went down for the third time in his career. Another left closed the show, knocking down Hemphill again to win by stoppage at 2:58 of the eighth.

At the time of the stoppage, Stevens was up 68-65 on each judge’s scorecard.

Oberlton (8-0, 6 KOs) got off to a good start, using the jab, and opened a cut on the corner of Brusov’s right eye. Brusov did connect with a few body shots, and he landed a good combination near the end of the first.

In the second, Oberlton worked angles very well, and really found a rhythm He controlled the distance and kept Brusov (12-1, 11 KOs) at the end of his jab. Brusov grew a little frustrated, at one time encouraging Oberlton to come forward. Oberlton changed his tactics in the third, dropping his attack down to the body, nailing Brusov with a left to the ribs.

By the fourth, Brusov’s right eye began to swell.

With :14 left in the sixth, Oberlton popped Brusov with a straight left that wrenched his head back. 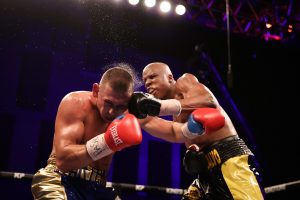 Knowing he needed a knockout to win, Brusov showed a sense of urgency in the eighth and began engaging his taller opponent more. The Russian did manage to open a small cut on Oberlton’s right forehead, and Brusov did land a heavy right in the final seconds of the fight.

“I feel good and was glad I went the eight rounds,” Oberlton said. “It really showed my conditioning. A lot of guys who have my type of record early on in their careers don’t take advantage of the opportunities and taking on opponents like I am.

“I knew it wasn’t going to be easy. He’s a guy from Russia and he’s no slouch. I started a little slow, but that’s the thing about pro boxing is you have more rounds to show what you need to show. I’m proud of myself tonight.

“I love SHOWTIME. I’d love to come back and show more. I definitely want to fight on SHOWTIME again.”

In the opening TV fight, junior lightweight Julian Gonzalez (9-0-1, 9 KOs) dropped southpaw Rosalindo Morales with a looping right hand in the final seconds of the first round in a scheduled eight-rounder.

Morales (9-1, 2 KOs) was lucky to get out of the first, returning to his corner on wobbly legs and bloody nose. After taking a big right from Gonzalez in the fourth, referee Shawn Clark stepped in and ended it at :27 of the fourth round.

“I’m not surprised the way it ended,” Gonzalez said. “I knew he had power, but so do I. I just had to stay composed and let him make the mistakes. I was using the straight right hand a lot, but I have power from the right and the left.

“It’s not that important to get knockout. Eventually, we’re going to be getting some decisions. I just have to keep believing in myself and get the job done.”