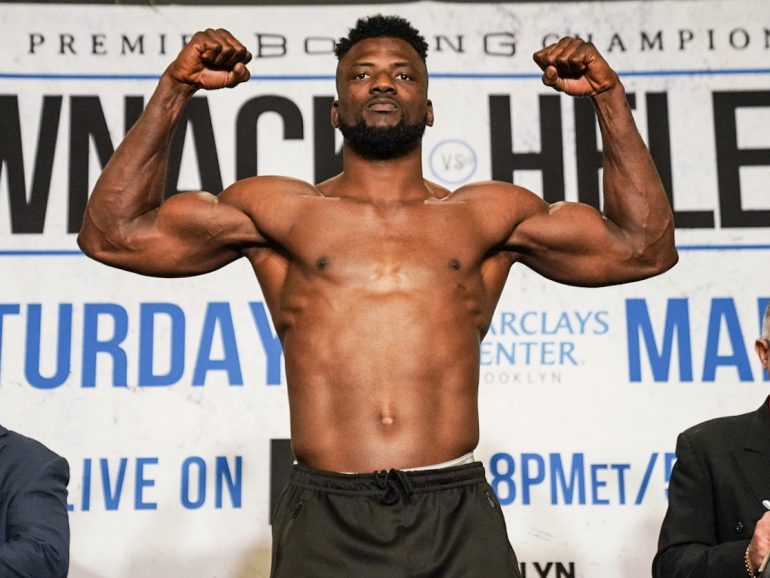 Efe Ajagba scored a 10-round unanimous decision over previously unbeaten Stephen Shaw in an uneventful contest between heavyweight fringe contenders on Saturday at the Turning Stone Casino in Verona, New York.

Ajagba (17-1, 13 KOs) won by unanimous scores of 96-94. It was his second victory since suffering the first loss of his pro career against Ring-rated (No. 10) contender Frank Sanchez in October 2021.

The 28-year-old Nigerian, who fights out of Texas, didn’t make a statement against the elusive Shaw (18-1, 13 KOs) but he was the forward-stalking aggressor and he outworked the the ring savvy St. Louis native in every round, mainly with his jab, which he consistently worked to the body and head.

“I went back to the corner and they told me to let my hands go, keep throwing punches, my jab,” Ajagba said. “I controlled the fight, so that’s how I won the fight.

“He tried to land the big shots. I watched him to see what he was going to do. He kept throwing the jab, using the jab more.”

Shaw played keep away during the first five rounds but gambled a little bit over the second half of the ESPN-televised main event, standing his ground in spots, landing pot shots and jabs. As close as the official scorecards were, the 30 year old must be kicking himself for not doing more against the somewhat one-dimensional Ajagba.

After five pedestrian rounds, Rice (15-7-1, 10 KOs) landed heavy long-range right hand opened a horrible eyebrow-wide gash just over Vianello’s left eyelid near the end of Round 6. The ringside physician halted the bout 40 seconds into Round 7 due the blood flow and worsening cut. Referee Benjy Esteves believed the cut was caused by an accidental headbutt and was in the process of instructing the judges to score Round 7 for a technical decision, however, he was informed by the ringside broadcasters, Top Rank reps and members of the Oneida Indian Nation commission that replays showed no headbutts, only that big right hand. Esteves gave the replay a look and made the correct call: Rice winning by TKO. Vianello (10-1-1, 9 KOs) was ahead on all three scorecards at the time of the stoppage.

“I did it again… another undefeated fighter,” Rice said. “I’m not here to call anyone out right now. I’m going to enjoy this victory and then see what’s next.”

Nova (22-1, 15 KOs), who rebounded from a fifth-round KO to Robeisy Ramirez last June, won by scores of 98-90 (twice) and 97-91, but the fight was more competitive than those official tallies indicate.

Nova dropped Lopez with a right cross followed by a left hook in Round 5 and was the beneficiary of a “technical knockdown” in Round 6 when Lopez was buzzed and then pushed to the canvas as he attempted to grab and hold. However the 29-year-old Puerto Rican had some trouble with Lopez’s lateral movement and accurate counter-punching during the first four rounds.

Nova was lobbing the harder shots from the opening bell, but Lopez (16-4, 6 KOs) had his moments when he pressed the action and let his body-head combinations go in close. The two traded on even terms down the stretch and both let it all hang out in the final round.

Email Fischer at [email protected] Follow him on Twitter and IG at @dougiefischer, and join him, Tom Loeffler, Coach Schwartz and friends via Tom’s or Doug’s IG Live most Sundays.